Did your eyes well up like mine when you heard Malala Yousafzai, the Pakistani girl shot by the Taliban, speak at the UN, urging education for girls and boys alike? She was shot in the head on a school bus by Taliban gunmen because of her campaigning for girls’ rights, but, speaking on her 16th birthday, she said that efforts to silence her had failed.

Her speech, to more than 500 young people from around the world, was delivered with grace, confidence and compassion. Her amazing recovery from a brutal attack has brought to the fore the fact that a quarter of young women around the world have not completed primary school, in spite of the right to education being enshrined in the Universal Declaration of Human Rights and reaffirmed  in two UNESCO Conventions. Malala told the UN on Friday that the Taliban’s attack had only made her more resolute:

“The terrorists thought that they would change my aims and stop my ambitions,” she said, “but nothing changed in my life, except this: weakness, fear and hopelessness died. Strength, power and courage was born.”

“I want education for the sons and daughters of the Taliban and all the terrorists and extremists. The extremists were, and they are, afraid of books and pens. They are afraid of women.”

In conclusion she said:

“Let us pick up our books and pens. They are our most powerful weapons. One child, one teacher, one pen and one book can change the world. Education is the only solution. Education first.”

Malala presented a petition of more than three million signatures to the UN secretary general demanding education for all in the fervent hope that her movement for change could be sustained.

When Marion Bartoli won this year’s women’s singles’ title at Wimbledon, BBC presenter John Inverdale asked listeners if they thought her father might have told a young Bartoli that she would need to fight harder for success because she was not ‘a looker’ like Maria Sharapova. There was an outcry and he has since made a rather half-hearted apology for the comments, but Bartoli endured even more taunts about her appearance on social media. Tweeters (mostly male) suggested she use her prize money to buy breast implants and called her a ‘fat slob,’ among other insults.

And how did she react? Not with whining indignation or with complaints about lack of political correctness. She responded with dignity, confidence and grace, saying:

“It doesn’t matter, honestly. I am not blonde, yes. That is a fact. Have I dreamt about having a model contract? No. I’m sorry. But have I dreamt about winning Wimbledon? Absolutely, yes. And to share this moment with my dad was absolutely amazing and I am so proud of it.”

Her father is quoted as reacting with the same generosity of spirit:

“I am not angry. She is my beautiful daughter.”

It later emerged that Ms Bartoli’s IQ is 175 which is extremely high and puts her in the top 0.0003% of the world. It would be interesting to know John Inverdale’s IQ and the IQs of her critics on Twitter, as well as to know whether they ever look in the mirror. 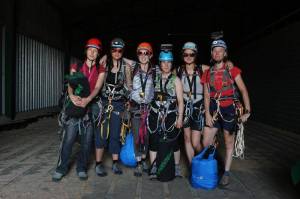 On Thursday, six extraordinary women from Greenpeace scaled the highest building in Europe, the Shard, to protest against drilling for oil in the Arctic in the wake of the melting ice cap. Shell, one of the world’s most powerful corporations, was forced to pause its drilling in Alaska because of safety concerns, but has signed a deal with Gazprom and President Putin, who has invited Shell to drill in the Russian Arctic instead, where corruption is rife and oil companies are unregulated. The Russian Arctic is now the new battleground for the fight to save the Arctic from a major oil spill, such as BP’s Deepwater Horizon in the Gulf of Mexico which would threaten indigenous communities and polar bear populations.

The biggest irony is that the only reason Shell and Gazprom can drill there at all is because climate change is melting the ice cap. They want to drill for the fuels that caused the melting in the first place. It’s this vicious circle which the Shard protesters and the Save the Arctic campaign seek to break. The group are named as Ali Garrigan, 27, from England, Sabine Huyghe, 33, from Belgium, Sandra Lamborn, 29, from Sweden, Liesbeth Deddens, 31, from the Netherlands, Victoria Henry, 32, from Canada, and Wiola Smul, 34, from Poland. They had trained hard to prepare for the climb which took a lot longer than expected. They chose to climb the Shard because it towers over Shell’s three London offices, including their global headquarters. Victoria Henry said:

“I’m doing something that I hope will help stop one of the most heart-breaking acts of wanton environmental destruction – drilling for oil in the Arctic. I’m over the moon that I can play any part in the mass resistance to this horrifying practice. I’ve climbed for years, but this is the biggest challenge I’ve ever taken on. I have a completely average fear of heights – not crippling, but certainly not absent. Am I scared? Hell yeah I’m scared. But I know that fear is only what you make of it. For me this is a personal act of bravery, and I hope that it can encourage anyone hesitating about taking action – no matter what scale – to take that step today.”

These are some of the many steps which together are building a movement big enough to stand up to the most powerful corporations on the planet. The Save the Arctic movement has grown to more than three million people and its message is being heard. Many more people are joining the movement after this epic climb.