C U L8r by Trevor Plumbly 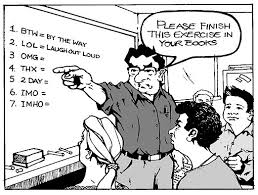 I hate people who say ‘I told you so!’ but I did tell u (sorry) so! And since my first warning to you, Mr Apple and Co have put the boot in even further to what remains of our youngsters’ language skills. Doubtless the Concise Oxford Dictionary, as is its wont in recent times, will be quick to spread the latest form of linguistic sepsis just to prove that a bunch of academic wordsmiths are up with the times. What on earth can those who are charged with protecting and promoting language be doing sitting on their asses while this sort of garbage is allowed free rein? Words are allowed to be invented or butchered either out of sheer laziness or worse still to suit electronic communication. Even broadcasters have become infected and two recent examples illustrate the point, the first by a news reader referring to an English soccer team as ‘Man United’ which sounded teenage and sloppy and any reasonable broadcaster should have known better than to attempt achieving ‘matey-ness’ by chopping off syllables. The second by a commentator extolling to sports fans the virtues or otherwise of ‘OH fence and ‘DEE fence’, musing mysteriously on ‘the big ask’ and other poor Americanisms uttered at screaming pitch by someone who could and should set better standards.

And it’s as simple as that! The more you travel with words the more they deliver; it’s sad really that many of today’s kids will never fully experience the joy of words, they’ll probably end up with a sort of electronically induced dyslexia. Attention Deficit Syndrome (ADS) isn’t really new but I’ll bet the numbers have increased somewhat within our schools since the plague of handheld gaming applications visited us, it’s probably easier for parents and teachers to blame ADS for bad communication skills and poor schoolwork than go through the drama of restricting access and use of electronic toys. Perfectly reasonable youngsters can morph into howling monsters on being asked to switch off mid-game, I don’t think it’s stretching a point to compare them with slot or poker machines, they seem just as addictive, harmful with overuse and just as capable of isolating users from all but fellow players. If they’ve got to have a purpose, let’s ensure that they’re used as a diversional treat rather than a bribe for peace and quiet.

There’s Another World Out There Kids!

There are plusses of course: E-Readers are fantastic, young readers can carry their books around virtually in their pocket, continue reading at the flick of a switch whilst parents can control the content. Sadly though, they seem to take a back seat because when it comes to the youth market, games rule the show and that’s going to carry a huge cost in the future. These ‘gamers’ (their word, not mine) rely more on dexterity than reasoned thought. Texting seems to require the ability to truncate and codify ordinary everyday words. The result is that intelligence isn’t needed when it comes to entertainment and perfectly serviceable words become too cumbersome for electronic use and fall into redundancy. Any human activity requires a foundation and exercise of some sort to produce a result and intelligence is no exception. Through circumstances beyond my control, I was forced to leave school at 15; reading, I discovered, wasn’t only an affordable form of entertainment and escape, it was a way of continuing an education that continues happily to this day. I certainly didn’t ‘get’ the classics or a great deal of poetry when I first ploughed through them but making the effort probably provided more value than the literary content. It’s likely that a high percentage of ‘gamers’ will never experience the works of Dickens, T.S. Eliot and company; good writers demand more than the push of a few buttons. Language in its best form can’t be electronically voice generated or delivered in screaming rants; it exists in good books and is generally spoken well by people who’ve read them. Call it a gift if you like, but it’s a gift that’s a lot cheaper and mentally healthier than computer induced idiocy.