On Being in Limbo by Angela Caldin 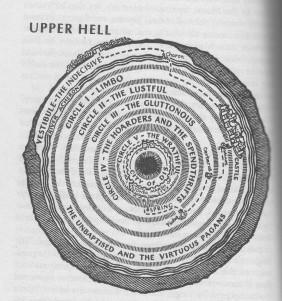 Many commentators on the disappearance of the Malaysian Airlines Flight 370 have described the situation of the friends and relatives of those on board as being ‘in limbo’. Starved of news and without any plausible explanation of what had happened, feeling neglected and overlooked, they found themselves in a state of continuing uncertainty which led to deep frustration, anxiety and despair.

The word limbo derives from the latin limbus meaning a hem or border or something joined on. The concept of limbo was developed by Peter Abelard in the 12th Century as being a place where the unbaptised would go after death. His great adversary -Bernard of Clairvaux taught that unbaptised infants (including stillbirths) went straight to hell and burned for all eternity, and indeed this was the main church line at the time. Abelard reasoned that only a wicked god would burn an innocent baby, so he developed the model of limbo as a credible alternative. The Church canonised Bernard, and excommunicated Abelard, but it accepted his speculative notion, though it has never been part of official doctrine. Limbo was the permanent place or state of the souls of those unbaptised children and others who, dying without personal sin, were excluded from heaven on account of original sin alone (limbus infantium). The name is also applied to the temporary place or state of the souls of the just and virtuous, who lived before Christ or without knowledge of him and who were excluded from heaven until redeemed by him (limbus patrum).

In Limbo about Limbo

Although Dante placed it in the borders of hell, as in the diagram above, limbo, as I understand it, was a pleasant place, not afflicted by the torments of hell, because the babies there had never actually sinned. Their only problem was that they never got to be baptised so they were still marked with the original sin which came from Adam and Eve and would have been removed from them if they had been baptised. The souls of the virtuous were in limbo only on a temporary basis and they had a great deal to look forward to. The only difference between limbo and heaven was that the people in limbo didn’t get to see God face to face, experiencing a kind of natural, as opposed to supernatural, bliss. In recent years, however, after the Second Vatican Council, the Church appears to have become ambivalent as far as limbo is concerned, saying that belief in its existence is optional. Interestingly, there seems little clarity about where all of those unbaptised souls might go if there were no longer such a place. Would they go to heaven or hell? The Church, by its own admission, does not have the answer to that question, though they have strong grounds for hope that all will be well.

Limbo in its Broader Sense

Limbo has since come to acquire the wider, more general meaning of a place of uncertain waiting, confinement, exclusion or neglect, akin to the abyss of not knowing in which the relatives of the plane’s passengers found themselves. This is in contrast to the original concept which described the occupants of limbo as being in a state of natural bliss, but it accurately depicts the situation of the anguished relatives of the vanished plane passengers; the experiences they endured during those weeks of terrible uncertainty correspond closely to the isolation and marginalisation of an in-between place of ambiguous loss.

2 Comments on “On Being in Limbo by Angela Caldin”