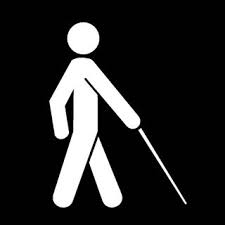 Whatever they’re calling us these days, whether it’s the basic ‘blind’ or the posh ‘visually impaired’, there’s a few of us around and I’m the one in our house. I’m a ‘blindy’: not totally, just enough to be a little more dependent than I’d like. The popular concept is that blindies need constant monitoring and attention to keep them fed, watered and accident free. But a blind friend recently mentioned a report from the USA which indicated that partners of the disabled often quoted their own ongoing stress as the cause of relationship breakdowns. When you stop and think about it, our partners do get the rough end of the stick. We’ve even got our own foundation to give us all sorts of gadgets and support to help us cope, while out on the street there’s a virtual army of well-meaning folk practically falling over themselves to help us negotiate our way, at the same time offering all sorts of verbal placebos like, ‘Aren’t you brave!’ or ‘How do you keep so cheerful?’ Sad to say those sorts of comments would carry a lot more value if they were addressed to our partners.

Dealing with blindness is, I’ll admit, a bit tough sometimes but what about those close to us? Pam’s life, I’m sure, has been affected more than mine: having to conduct a daily routine for two people, explaining to grandchildren that it’s not a normal house or even a normal grandfather; carelessly discarded toys and shoes on the floor are a danger, or not putting things back in the same place is just like hiding them. Restaurants need to be selected for brightness and ease of access rather than the menu; travel, holidays, even simple shopping trips need to be carefully thought out to make them as pleasant as possible. Then, of course, there’s the balancing act for both parties: one struggling to define the difference between making things easier or compounding the situation by being over-helpful, while the other half fights the frustration of sight loss and resorts to using bluffing techniques to minimise the problem in an attempt to maintain as much independence as possible. Small wonder that relationships founder.

Seeing it My Way

For the most part the main concern is external; I’m pretty much OK on my own turf but tend to panic a bit in crowds or busy places which really restricts others options. Browsing in art galleries and museums can’t be much of a pleasure with the thought of someone parked in the lobby at the back of your mind.  Restaurants are a problem of course: when you can’t see the food or the faces of your fellow diners, it tends to dampen things down a bit, but we seem to coping with it pretty well; there’s been no sign of a mass protest to date, but if one occurs I can’t say I’d blame them.

To even things up, I obviously need to make some adjustments. In writing this I’ve at least acknowledged that my particular disability affects the entire family, not just me, and that I’ve got concessions to attempt as well. Such as encouraging Pam to get out and about as often as possible, to attend social functions without me in tow because it can’t be much fun at a party if you’re constantly worried about whether your partner is enjoying himself or is even safe. Such as making a concerted effort to avoid becoming housebound; a walk in the park should still be a pleasure rather than the ordeal I’ve convinced myself to avoid. Such as really meaning it next time we decide to say, ‘You choose’. Such as attending my grandsons’ sports events; even if I can’t see the action, it might be nice for them to see I care enough to make the effort. Funny isn’t it? One chance remark should highlight such seemingly simple little things that I’ve lost touch with through trying to come to terms with my own problems.