Posted on October 4, 2014 by talkaholics

The Confessions of a Grumpy Old Git by Trevor Plumbly 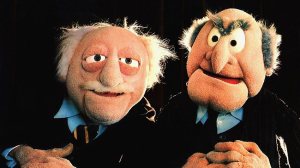 I was sitting at a café the other day, next to an obviously proud and knowledgeable grandmother and her offspring. As grannies go she was of the gushing variety, lots of high voice baby-speak along with helpful hints and useless clichés to the obviously frazzled mother. ‘They don’t come with manuals dear,’ she offers as one little horror decides that the only way to attract attention is to throw a screaming fit, and then somewhat nostalgically, ‘Ah, the terrible twos!’ as another destroys some crockery. Everybody, it seems, falls over themselves to excuse the shortcomings of the young, but nobody picks up the whitewash brush when one of us oldies crosses the line. Nobody cries out, ‘Oh it’s just the stupid 60s or the senile 70s that’s making him/her behave like that.’ Quite the opposite really, all we get is ‘silly old bugger’, ‘old enough to know better’, or worse ‘getting on a bit’ and ‘had a good innings’. We’re simply not getting a fair deal out of this ageing lark; it’s either blunt accusation or muttered platitudes.

I’m telling all you potential pensioners right now that they’re out to get you, any way they can. Take health insurance for example: anyone with a twinge of reality knows bloody well that government funded services aren’t the quickest passage to maintaining good health, so just to make sure, you go private and dutifully shovel out the dollars. What happens when you reach 65? They double the premium! At a time when you’re most likely to need what you’ve been paying for over the years, the rapacious sods respond by pricing you out of the market. Then there’s the justice system: teenage thugs by the dozen get hauled up before the Beak; they get immediately surrounded by youth advisers, youth crime prevention people and probation services, but what do we seniors get: legal aid from someone barely out of law school who looks and sounds as if he’d be happier somewhere else. Anyway, if you lose, don’t bother appealing, the way the courts are clogged up, you’ll probably be dead or totally gaga before they get round to you. Forget Grey Power folks, it’s more of an oxymoron than a movement.

Time to Take It Easy

I’m actually surprised there’s not more crime committed by the elderly when you consider the alternative retirement pastimes. People insist that it’s good to ‘take up’ something and there are all sorts of goodies out there, ranging from macramé classes to line dancing, all specially designed to take the edge off trying to put a daily dose of bugger-all into a weekly vacuum and make it interesting. Make no mistake, there’s lots of wrinklies out there enjoying that sort of glide time towards the casket, but personally I reckon a bit of crime might be a touch more fun; nothing really dodgy, just a bit of white collar fiddling to make a few bob and pass the time. Even if I get caught; so what? Rubbing shoulders with the criminal classes must be a bloody sight more interesting than indoor bowls tournaments. I may take things even further and form a gang. Lots of other people can form gangs: bikies, Rotarians, Freemasons, trade unionists, the Mafia and even political parties, but it’s difficult for us oldies, we’re a bit on the outer edge, so to speak. Lots of us are in ‘residential care’ (institutionalised) and don’t get much opportunity to cause a bit of aggravation, some go on ‘group activities’ (yuk!), while the rest of the poor sods might just as well be chained to a Zimmer frame with a use-by date stamped on their foreheads. Not for me folks! There must be millions of grumpy old gits out there and all I need to do is unite them; let’s face it, the churches did it, so it can’t be that tough. For the rest of you contented ‘golden oldies’, when they come to get you, don’t say I didn’t warn you.