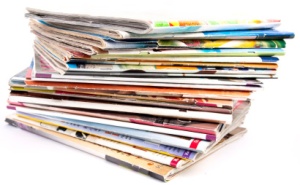 Buying another copy made me feel like a lapsed junkie. I scurried along Ponsonby Road with my fix. Tightly rolled, of course; there’s not much point flaunting one’s failures in life, is there? Naturally I was instantly sorry for the fall, but the front cover of this particular women’s magazine positively throbbed with hinted titillation: ‘Does your dog need Prozac?’, ‘Women who dare to go grey’, plus, there was the ‘Bonus Magazine’ which promised me entry to ‘Wendyl’s Private World!’ At the time of purchase I didn’t have a bloody clue who Wendyl was, but if she wanted to share her private world with me and a few million others, a few bucks ain’t going to stop me having a nose round. And if that wasn’t enough, there was the weekly wisdom of Urzila Carlson to grapple with.

The Wheat from the Chaff

Sadly, this issue didn’t live up to its front page promises. In the world of women’s magazines, things seem to have slipped a bit since my last visit; now, it seems, nothing is too trivial to escape comment. Prozac for dogs? I no longer own one, but if I did I’d want one that barked at intruders instead of lying around in a zonked out haze. This sort of stuff is hardly of world import; for it to be of any conversational value, you’ve got to find a doggy person to share it with. I bypassed ‘Women who dare to go grey’, feeling, a little unkindly perhaps, that they’re bloody lucky to have enough of the stuff to worry about. Wendyl, I discovered was more of a Pollyanna than the steamy siren with the dark secrets I was hoping to discover in her private world; maybe her world was private because nobody else was interested enough to go there. I dunno, but it was all getting a bit too boring for my taste.

Them was the Good Old Days!

Urzila was another let down. I was expecting ‘earthy’ on the basis that anyone going through life with that tag would have knocked around the dodgy side of things a bit and had a tale to tell, but no, she turned out to be a pleasant columnist in the same mould as Wendyl, with the same genteel jolly hockey sticks fixation on the fripperies of life. The last resort was the horoscopes, but that was another disappointment; even the heading was wishy-washy, just ‘Horoscopes’, no gypsy sounding name hinting at a pointed nose and black-painted fingernails. The content was more dial-a-cliché than astrological hints. Longingly I thought of a previous issue that contained a formula by which you could discover whether you were destined to be a noodledick or a sexual Goliath by simply dividing your birthdate until you came up with a single digit figure. That’s what I call magazine journalism, not screeds of literary molasses on the romantic benefits of spraying pillows with rosewater. I’ve decided to quit! I’ll go cold turkey of course, there’s enough verbal methadone in this issue to get me over the first few hurdles. I have been seduced by these $6 soap operas for too long; it’s time to quit and turn the old brain onto less compulsive matters. As a last gesture of defiance, I have consigned the object of temptation to the rubbish bin where it lies in state with an honour guard of empty beer cans.