Looking back by Trevor Plumbly

Most of us have recovered from the excesses of feel-good and overindulgence and are bracing ourselves for the new year. But hang on folks! What about putting the last one to bed. Lots of stuff happened in 2014, and it seems a shame to let it go without some comment.

Man of the year? I am not a Catholic but surely it must be Pope Francis. Rising from relative obscurity to become the world’s most recognised religious leader must be daunting enough, especially in the light of the problems faced by the Vatican over the years. It seems to me that, for the first time in the history of the Catholic Church, they have appointed a leader with an eye to the future and a willingness to confront its entrenched problems: divorce, abortion, homosexuality and, it seems, never-ending histories of physical and sexual abuse committed by those entrusted with children’s welfare. Add to that an arcane system of governance, together with years of self-denial. Under Pope Francis, the church has ceased to adopt the stance that it is only answerable to God and is finally openly discussing and admitting its faults. Any leader that has the courage to accuse his own administration of suffering from ‘spiritual Alzheimer’s’ deserves all our respect. 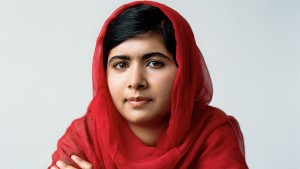 The fact that Pakistani teenager Malala Yousafzai survived a brutal shooting is astonishing enough, but for her to rejoin the fight for female education in Pakistan shows a commitment that should shame its religious leaders and politicians. Her acceptance speech for The Nobel Peace Prize was, as you’d expect from any teenager, lacking in polished rhetoric, but it made up for that with sincerity and deep commitment, stressing at one point that the leaders of her country have less difficulty finding guns for its youth than books. She displayed no visible anger or high emotion which tended to make her message clearer. I felt it was rather ironic that we needed a seventeen year old girl to remind us that right and wrong were once simple, basic concepts until politicians and religious leaders took it on themselves to interpret them for us. I doubt Pakistan will gain internal stability for many years; religious and political intolerance are simply too ingrained for short term solutions, but the zealots will age eventually and if the country’s youth need a voice and a role model, Malala Yousafzai represents both.

It’s been a bad year for a lot of entertainers, with everything from mild drunken stupidity, to drug fuelled violence right up to serial sexual abuse. There’s nothing new about that of course, it’s been there since they invented limelight. Those involved in the popular music field seem particularly inclined to excess, small wonder really, as Oscar Wilde would have it ‘the burnt child loves the fire’ and easy access to casual sex, hard drugs, booze and fawning adulation is a pretty heady cocktail to turn down. Some do turn it down though, and one such is Leonard Cohen. My first experience of this remarkable man was in the Royal Albert Hall in 1971. It was during the folk music revolution and all we really knew about the man was in a few versions of his songs by Judy Collins. He had a quiet, unassuming stage presence, performing his gentle, intelligent songs in as much of a poetry recital as a musical concert. A few days ago I watched him in a recent concert; at the age of 80, the delivery hasn’t changed nor has the quality and content of his songs. There doesn’t seem to be any anger in Leonard Cohen; he neither seeks nor attracts the lurid headlines, offering little more than gentle questioning through his lyrics. But he, along with Pope Francis and Malala Yousafzai, gave us something good to remember for 2014.