The plastic barrel thingy or FU

Some people do and some people don’t. Stand out, I mean. There are those that can fade into the wallpaper, whilst others, without exerting any great effort, can switch on a sort of inbuilt social booster mechanism. With Emily, there aren’t many flat phases in her life. Ange’s last piece reminded me of my birthday: the present seemed about half as big as Emily as she and Susan burst through the front door chanting ‘Happy Birthday to You!’ with considerably more vigour than melodic talent. She placed the box in the centre of the floor with all the reverence of a Vatican altar boy. ‘Mango Jacks Brewing Co. Brewing Starter Kit’, the box proudly proclaimed. I attempted a sidelong glance at Susan, but ‘blindies’ don’t do glances all that well; ours end up as a sort of basilisk stare which tends to discombobulate others. “Don’t worry,” Ems said, “it’s all sorted; I told the bloke in the shop that I was bloody useless and that you were blind and he said it wouldn’t be a problem”. The box contained a sort of plastic barrel thingy, odd attachments and sachets of the various ingredients required to create the wonder brew. And, most important, the instruction leaflets, which, even at a cursory glance, made it clear that my role would be that of the brewer’s assistant, rather than the actual creator of the promised pale ale.

The Gang’s All Here

Pam lends a hand with botttling and labelling

As is usual at all our meetings, Ange took charge of the organising, thus relegating me to assistant to the assistant brewer. Under her charge, the instruction leaflet was scanned carefully, then read out aloud to ensure that Ems and I not only understood the importance of following the instructions religiously, but also just to confirm who was going to play the part of Moses. Ems responded by morphing into master brewer mode, at one point even castigating Ange for coughing too close to the fermentation unit (FU). Bottling and tasting followed a couple of weeks later with partners in attendance and, as a result, the language was far more moderate and the humour less barbed; but still a great night, the beer wasn’t half bad and Pam got her kitchen back!

Here, There and Everywhere 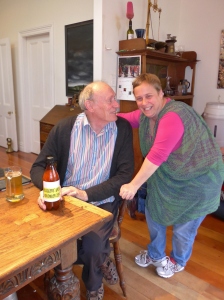 About this time, it’s traditional to have a do to say farewell to Ange as she sets off for her 6 months in the UK. Nowadays Ems has three lively kids, a fairly new job and a home to run, so I appreciate that she’s pretty busy; but to double-book on a blog dinner goes quite beyond the pale. Maybe she should introduce some sort of ‘triage’ system to control this deluge of popularity. To top that, she is even swanning off to bloody Las Vegas, then on to Britain. I’ve never been to Vegas but I’ve read the books and seen the movies, and I wonder if she’s ready for the place, or indeed, if it’s ready for her? I don’t think she is emotionally kitted out for the hushed atmosphere of high stakes poker, but I can see her hunched over a slot machine, vacillating between muttered curses and rebel yells, at the same time as exchanging life stories with a Godfather’s granny on the next machine. Emily and Vegas will enjoy each other: they’re both a bit over the top, and addictive.

The dinner/meeting, proceeded without her and a fine meeting it was, with great company and civilised conversation; but without the occasional four letter word and her booming laugh over the dining table, it just felt like someone had forgotten the salt.