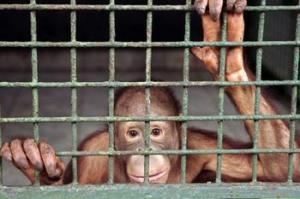 Strange days indeed down under, with a perfectly healthy elephant waiting in transit for entry to NZ at the same time as an equally healthy female gorilla is battered to death in an enclosure  by a ‘dominant male’. You have to wonder what it is about us humans that drives us to transplant animals across the globe and cage them for public entertainment. In Victorian times the practice extended to mental patients as well, and it was common for the upper and middle classes to treat a visit to the local asylum to view the ‘lunatics’ as a form of family entertainment; fortunately that particular form of barbarism stopped years ago, but why on earth do we persist in exactly the same practice with animals? I don’t like zoos or aviaries: there’s just something about them that affects me in much the same way as seeing performing circus animals.

I suppose the original purpose of a zoo was partly to satisfy the 19th Century taste for the exotic as well as some sort of status symbol for cities. Every major city boasted a zoo and, in most cases, it was sited close to the centre for easy access. They were deemed ‘educational’ and I, along with thousands of other kids, was dragged round the cages to ooh and ah at moth eaten lions and puzzled sad looking gorillas behind bars. God only knows what gleanings of knowledge I was supposed to gather from the experience. When the logic of the ‘education’ theory ran aground, a new excuse for maintaining these places obviously had to be found and ‘the preservation and protection of the species’ was born. Which sounds laudable, but, at the risk of seeming cynical, let’s ask, ‘Protect them from what?’, or more importantly, ‘Preserve them for what?’

The mere mention of ‘endangered species’ galvanises zoologists and apologists alike, but surely the principle threat to these creatures comes from us. Now that China has finally seen the light, the trade in ivory will eventually cease and the untiring efforts of Greenpeace are forcing the Japanese to reconsider their whale harvesting programme, but for the rest it seems that confinement is the most convenient solution. Where on earth is the logic in placing an animal in an environment totally at odds with its instincts and spacial needs? A breeding programme may well provide some scientific satisfaction, but what about the future for the offspring? Obviously, these creatures couldn’t survive in their natural environment, so does that mean more cages for more gawkers? If we really want to get serious about ‘endangered species’, why not do it properly and create more wildlife reserves? Most zoos occupy prime land; selling that off would provide some finance and use central city land for humans rather than animal detention centres. Finally to answer the obvious question, yes I’ve owned pets: dogs mostly but none of them ever got chained or caged.