The Pick of the Litter by Trevor Plumbly 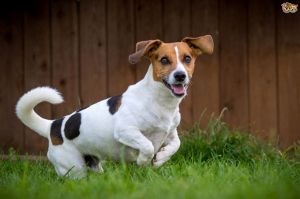 It was time, we decided, that Ben should have a dog. Boys need a dog; a dog in the house sort of rounds things off – at least that was my theory at the time. Pet dogs, I discovered, don’t carry the same domestic status in NZ as they do in England; some of them actually sleep outdoors, which is fine for farm and guard dogs, but hardly appropriate for what we Brits regard as a family member. Our first problem arose from selecting the breed: Ben favoured larger sizes, but from my experience with his paper run venture I knew bloody well who would end up exercising the thing. Pam was inclined towards a poodle; practical enough I suppose, reasonably portable and non-moulting, but me out in public towing a poodle? Let’s get real. My pick was a Jack Russell, also portable but a bit more ‘blokey’ than a blow-dried French mutt.

My plan was brilliant yet simple: any sort of puppy is tough to resist, plus it’s impossible in their early stages to distinguish between a potential lapdog and an embryonic throat-ripping Doberman, so we should, at least, drive out to look at Jack Russells. An hour later, we were homeward bound accompanied by Charley, the smallest on offer, but if the breeder were to be believed, certainly not the runt but in fact the pick of the litter. He slotted in pretty well at first, but as he grew so did the problem with our cat. Billy was an alley cat and street trained. He declared war on Charley at first sight, a war that lasted throughout their joint lives. It was fought on two fronts: above ground level it was all Billy whose slashing claws always seemed to convince Charley that a sense of adventure had its limits, but out on the flat he was fearless, a magnificent sight in full pursuit, 18 inches of snarling animosity for anything feline.

All dogs need training and for some reason I qualified as the trainer. House training went OK. anything worth chasing was outdoors anyway, but the more advanced stuff didn’t go so well. ‘SIT’ followed by a light tap on his butt got me a lightning strike of teeth inches away from the instructive hand. The leash was another failure: Charley loved an outing but not at the end of a rope, the master and faithful hound thing simply wasn’t going to happen and it seemed that life would be less stressful if we both sort of did our own thing. Freedom suited Charley no end, but me, less so; frequent trips to the pound to bail him out at $60-00 a pop took the fun out of it for me until I discovered that, instead of spending the night in the kennels with the other strays, Charley dined with the pound-keeper’s daughter and shared her bed. In the light of that I was able to negotiate a reduced rate. Charley was too pig-headed to be a pet and I’m not really a ‘doggie’ person, but we were good mates. He had a great, untrained, unchained life and, somewhat surprisingly, lived to a ripe old age, still chasing every cat in the street and snapping at whatever displeased him. I never owned another dog after Charley, having the pick of the litter spoils you a bit for other dogs. Looking back, I guess I never owned Charley; the reverse is probably closer to the truth. A parting shot to all prospective dog owners: by all means take your mutt to training school, but for me the sight of Charley, howling in full pursuit, though never quite catching neighbourhood cats is a hell of a lot more impressive than clockwork obedience.