Posted on September 8, 2015 by talkaholics

Is a problem halved? By Trevor Plumbly 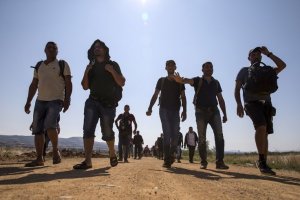 The trouble with high speed internet news is that it burns too brightly to have lasting value. Yesterday’s news, it seems, regardless of its horror or educational value is routinely discarded in favour of ‘breaking news’. Stories on the plight of refugees flooding into Europe dominate world news, and rightly so, but for how long? And sadder still, to what effect? As I’m writing this, the story is being aired of a dead toddler washed ashore on a Mediterranean beach along with the bodies of his brother and mother. Last month another young boy suffocated to death in a suitcase attempting to enter Europe via Spain. Countless others are facing horrific death seeking relief from persecution or hunger. It’s not racial or even religious, it’s simply a humane issue, as it was in the 1930’s and we, and the so-called civilised countries, are behaving just as we did then by doing very little about it.

Bring us your poor

Germany under Angela Merkel seems to be one of the few countries prepared to offer more than lip service by easing entry restriction and badgering the other EU countries to do more. President Obama, speaking as the leader of a country hugely indebted to a refugee influx, laments the situation but obviously places more value on military matters than the victims he and other like-minded countries have created. The Hungarian response is nothing short of shameful, a country that just a few years ago appealed against occupation and oppression to place travel restrictions on refugees is hypocrisy at its worse. Switzerland, apart from playing host to the organisations and committees charged with the welfare of those under threat does little in positive terms.

Obviously refugee numbers of this magnitude will cause economic and social problems for Europe. It seems inevitable that thousands pouring into already over-populated areas and cash strapped smaller countries will create tension, and of course race and religious problems will follow. Sad to say New Zealand’s record is nothing to be proud of. We have land to spare and a small population but take only 750 refugees per year and our Prime Minister, despite being the son of a Jewish refugee, seems reluctant to increase that figure dramatically. I don’t doubt that after extracting political points he’ll make a token gesture by accepting a few more. He justifies spending $25 million fiddling around with a flag design, by claiming the need for ‘branding’. Somebody should perhaps point out that we’re a society not a box of soap powder and if that $25 million were spent on increasing our refugee intake to 5% of the population, we wouldn’t need another ‘brand’. Taking that course would introduce more diversity into a country that badly needs it.

Funny isn’t it we, the so called ‘free world’ crow about the value of a global market, but back into a defensive corner when it comes to global humanity.

One Comment on “Is a problem halved? By Trevor Plumbly”