Posted on October 6, 2015 by talkaholics

The Second Going by Trevor Plumbly 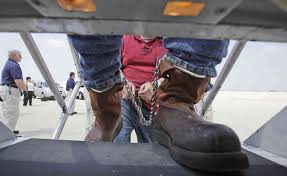 Dealing with criminals has been a problem since biblical times, and it’s pretty obvious that most permutations of solving matters have been tried over the centuries. From dismemberment medieval torture to the current favourite of avuncular admonishment, the most inventive solution, deportation, was devised by the British in the 18th Century. It was heralded as a win-win piece of legislation, dumping the undesirables as far away as geographically possible, whilst planting the Union Jack in yet another quarter of the planet. Anything of value to the Mother Country would be virtually free of labour costs. The 19th Century brought the end of deportation and tyrannical governance, the discovery of mineral wealth, the birth of a colony and the beginning of an influx of immigrants from Europe and Asia.

‘When you come to a fork in the road, take it!’ (Yogi Berra)

To some extent this piece of cockeyed advice seems to fit Australia’s current move to solve its crime problem. In their wisdom they’ve introduced legislation to deport foreign nationals convicted of any crime carrying a prison sentence of twelve months or more. I personally don’t have too much of a problem with that, like everyone else they’ve probably got enough crims of their own to contend with without hosting other peoples. But it has raised diplomatic eyebrows here in New Zealand. The problem is that a huge number of our citizens live and work in Australia under a sort of open door policy, some take citizenship, some don’t, and that’s the fork in the road. Some of those awaiting deportation have spent most of their adult life in Australia and whilst it’s possible to argue that they should have sought citizenship there, it’s also reasonable to assume that it would have been declined on criminal grounds. These people will end up practically stateless, tossed out of one country and sent to another, with little or no family support or social connections.

There’s always been a reverse aristocracy in Australia, a sort of inbred arrogance specially reserved for those direct descendants of  convicts that have now ‘made it’. In a way it’s a bit rich really that those who owe their own status in life to their ancestors criminal activity should encourage or tacitly approve of any legislation remotely similar to that their forefathers railed against. Despite the irony of that, the concept of returning undesirables to their own country does carry some degree of judicial fairness. But, storing them in detention camps, however temporary, definitely does not. These sort of camps shouldn’t exist in any civilised country. Having imprisoned someone for an offence, then following that up with deportation should be enough punishment for any society. Treating detention camps as way stations is simply adding another sentence and no different to the 18th Century practice of using Newgate Prison or convict ships for the same purpose. It isn’t administering justice, it appears to me to be more like reviving a 200 year old form of cruelty.