Banging The Gong by Trevor Plumbly 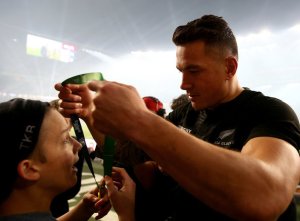 In the past I’ve made it pretty clear where I stand on Queens Honours and the idolatry afforded to sports celebrities, an event last weekend hasn’t caused me to soften my stance. The occasion was the World Rugby Cup final. For those of you unversed in this form of sport, it basically boils down to two sides of fifteen players brawling about which end of a playing field an oval ball should be placed on the ground. There’s obviously more to it than that, but trust me, if you’re not of the cognoscenti, that’s all you need to know. Few things actually excite New Zealanders apart from rugby. It’s not uncommon to hear previously PC parents on the side lines screaming, ‘Get stuck in!’ to hesitant or bemused infants. This exhortation to violence is constantly inoculated into young players. Those with a mild death wish shine early in their playing days, while those with more perceptive minds don’t. Those that can combine the two in later life, aspire to become All Blacks.

All Black players in NZ are public property, more available than sporting stars elsewhere. That may be due to population size, but more likely to a national belief in equality, elevating them to superhero status or bestowing foreign titular honours on them seems to me to be contrary to that ethic. None of the titles will ever be used in normal contact, calling an otherwise ordinary bloke ‘Sir’ smacks of sucking up and prefixing one’s own name with it is rank pomposity. Once again let me stress I am not anti-sport despite my youthful failures at it, I am just wary of the growing trend of flicking awards around like confetti. These All Blacks are superb sportsmen and well worthy of being world champions, for that they deserve public recognition, praise and financial reward. By the time you read this they will have had a hefty helping of each.

Let’s get rid of knights and dames along with the alphabet soup orders doled out to the less well connected. Let’s have a one size fits all ORDER OF NZ (ONZ), thus the Women’s Refuge volunteer would be afforded the same recognition as the financial wizard and the odd sportsperson, in an egalitarian country, what could be more equal than that?

In a rugby mad country there’s never a shortage of armchair halfbacks, and I guess the post mortems will continue until the next world cup and all will relive their favourite moments ad nauseam, ‘that run’, ‘that pass’ or ‘that kick’. Mine took place after the final whistle when a young English fan sprinted through the security cordon to greet his favourite All Black. Along with an autograph he was gifted the player’s world cup winner’s medal. The player in question, Sonny Bill Williams only comment was ‘I hope it means something to him, I don’t need it. I know I’ve won it, that’s enough for me.’ An act of extraordinary generosity, worthy of any knight. There are always exceptions in life and in the case of Mr Williams I’d make one, and be more than happy to call him ‘Sir.’