Posted on January 6, 2016 by talkaholics

It may not be the most exciting way to spend New Year’s Eve, but going to see the film Suffragette in my favourite cinema at Mission Bay was definitely both rewarding and thought-provoking. 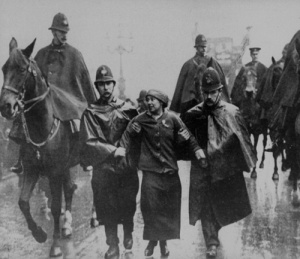 Votes for Women in the United Kingdom

It’s hard to believe that only about a hundred years ago, the women of the UK had to resort to sustained violent action to advance the cause of votes for women. In the film, which is set in 1912/13, it is made clear that the women of all classes of society were completely without power. We see that an upper class woman who has been arrested has no right to sign a cheque for her own release, but must rely on her husband to do so. She fails to persuade him to pay for her poorer colleagues to be released with her, even though it is her wealth originally that he now controls. Later, the husband of the film’s heroine is able to arrange for the adoption of their son against her will. In response to these injustices and perceiving the vote as the only way to combat them, we see women of all walks of life participating in demonstrations, breaking windows with stones, blowing up post boxes, cutting telegraph wires and, in one extreme move, blowing up the country residence of Lloyd George. As a result of these violent actions, many of the protesters were sent to prison where some went on hunger strike and were then force fed. This horrific form of torture is graphically recreated in one of the most harrowing scenes in the film. The death of Emily Wilding Davison, a militant suffragette who was killed when she stepped in front of the King’s horse at the Derby in June 1913, dramatically highlighted the cause of women’s suffrage. She had previously been jailed on nine occasions and force fed 49 times.

Kate Sheppard on the $10 note with white camellias, the flower adopted by the NZ women’s movement.

Votes for Women in New Zealand

It was not until 1928 however, that all women in the UK finally got the vote after much hostility and dragging of feet by men who believed that society would collapse if women emerged from their domestic subjugation and took an active role in politics. It’s startling to compare this date with the date that women got the vote in New Zealand on the other side of the world. That date was 1893, more than thirty years before Britain, making New Zealand the first self-governing country in the world to grant the vote to women. This was achieved with a great deal of hard work and sustained action but without the need to resort to violence or civil disobedience. The movement for women’s suffrage gathered momentum from the mid-1880s, especially following the establishment of a New Zealand Women’s Christian Temperance Union in 1885, whose members believed that votes for women would lead to a more moral society where alcohol was restricted. Led by the dynamic Kate Sheppard, WCTU campaigners organised a series of huge petitions which were presented to parliament: in 1891 over 9,000 signatures were gathered; in 1892 almost 20,000; and finally in 1893, nearly 32,000 – almost a quarter of the adult European female population in New Zealand. In September of that year, all New Zealand women were given the vote. Kate Sheppard’s stirring words still resonate today: “All that separates, whether of race, class, creed, or sex, is inhuman, and must be overcome.”

It’s interesting to speculate as to why New Zealand led the world in this way. Was it because New Zealand was a young self-governing colony where discriminatory views from the old world had not had time to become too entrenched? Was it because women were working hard helping their husbands develop farms or businesses and coping with real hardship in the process, believing that in return they and their female descendants should have a better deal from this new colony? Was it because women’s suffrage came to be appreciated as a central element in New Zealand’s image as a, progressive, pioneering society? Whatever the reasons, this small country at the bottom of the world can take great pride in this historic first.

2 Comments on “New Zealand Leads the World! By Angela Caldin”