Raising the Standard by Trevor Plumbly

Whatever their moral and political limitations, those aspiring to control our welfare have a deep-seated need for adulation and obedience from lesser mortals.

Historically, in the ‘developed countries’, this was achieved by assassination, chicanery, or good old fashioned nepotism. Nowadays though, such tactics are either deemed redundant or given a more palatable label; somewhat sadly, it seems we live in an age where obfuscation conquers all and politicians just love it! Few, if any, seem capable of simple dialogue, preferring instead rambling monologues, touted as ‘statements’. A recent example here in NZ was a minister extolling the benefits of a proposed trade agreement: after a lengthy diatribe riddled with unspecified potentials and acronyms, he refused to provide the details of actual benefits to us because they might affect our negotiating position, though adding knowingly that ‘down the track’ they could be ‘substantial’. 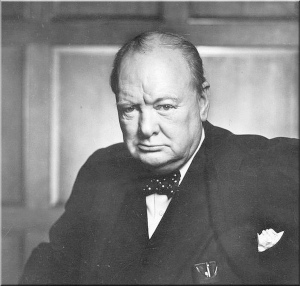 Since politicians were forced to become ‘men of the people’, some have adopted a catchphrase, rather like an advertising jingle, to enhance their appeal, theory being, that if you repeat it often enough, they’ll believe it. Churchill’s ‘We shall never surrender!’ takes a lot of beating whilst Macmillan’s ‘You’ve never had it so good!’ fell a bit short, but both were uttered from protected ground, illustrating perhaps that we all win some, but politicians lose very few. That might be a bit harsh, but show me an impoverished politician and I’ll promise to soften my cynicism. Our current PM, John Key, certainly doesn’t have any personal financial worries, his difficulties are more along the lines of behavioural consistency. He yearns to be taken seriously, yet refers to David Beckham as being as ‘thick as bat shit’, and tops that by repeatedly tugging a waitress’s pony tail; he practically drools over the Royals whilst forecasting independence, presumably after he gets his knighthood. 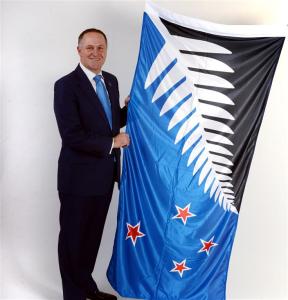 In a ‘Donald Trump’ moment, John decided that having a new flag would give us a patriotic gee-up. The process of getting a new flag is quite beyond the ken of ordinary folk. First there’s funding: he solved that by pulling $26 million from the practically empty coffers he was bemoaning weeks before. Then there’s design: this was open to all, and hundreds joined in. Once the committee had weeded out the more bizarre (which I felt was a bit of a shame) they set off to tour the country to sell the idea. Despite the rare opportunity to discuss the choices with (gasp) a ‘flag historian’, the roadshow didn’t really pull the punters. The referendum rejected the options and we got lumbered with one of the most expensive collections of unwanted designs more suited to cheap tourist outlets than national symbolism. John hailed the decision as the people’s choice, forgetting perhaps that when the same people voted against the sale of national assets, he totally ignored them. I guess that’s politicians for you folks, and our Johnny is no exception; as he frequently says, ‘At the end of the day, it is what it is.’ Which loosely translates to ‘It’s not my fault!’ 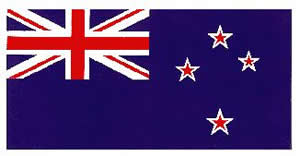 ← RIP Alf by Trevor Plumbly
Food Waste and Food Poverty: a Metaphor for our Times by Angela Caldin →

4 Comments on “Raising the Standard by Trevor Plumbly”