Ecclesiastes and all that by Trevor Plumbly

The mice have departed only to be replaced by more virulent pests: the politicians are back from yet another recess and, as ever, they’re anxious to invade and parade their virtues. I know I go on a bit about them, but their ability to speak at length and say so little never ceases to amaze me. ‘Sure there are problems in some areas, but they were caused by the previous administration’, is a familiar cry. It could be argued that we voted them in to fix those problems, but arguing with these people is about as logical as talking to your shoes and just about as productive. Lewis Carroll would have been proud to have authored some recent comments from those entrusted with our well-being. 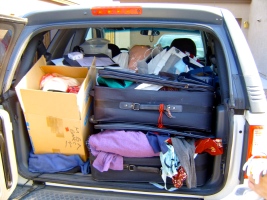 Living in a car

How to lead from behind

This is a tricky ploy only achieved by those with the ability to build sentences with at least one exit strategy. Take the recent housing crisis: on being informed that a growing number of families were being forced to sleep in cars and garages our leader stated that that was ‘unacceptable’. Nice one John, that’s leadership for you! The Minister for Social Housing seems blissfully unaware of the extent of the problem, but if it was as bad as reported she would find it ‘untenable’ (feel better folks?). Not to be beaten in the piffle competition, the Minister of Housing sagely offers that the reason for the housing shortage is because of a population increase! Surely an honorary doctorate from the University of Silly Sods beckons. Another notable gem this week was from the Minister of Conservation: she has created and appointed an ‘Ambassador for Endangered Species’; she is somewhat unclear on his/her role or salary package, but I guess there are some things we’re better off not knowing, so maybe she’s being kind.

Going through the motions

I arrived in NZ in 1972 and felt lucky to live in a country with a serious attitude to crime and little apparent poverty, but sadly with an increasing youth crime rate, an overworked court system and a shortage of remand centres we’re now heading towards a justice system that simply can’t cope. Domestic and child abuse has soared in recent years along with drug related offences; burglary victims have a less than 10% chance of seeing a conviction or any recovery. I still regard myself as lucky to be able to live here, but when a mother of eight children is allowed to run up a social service debt of $100,000 for motel bills because no other accommodation is available, when two people accused of murdering a toddler are allowed to plead to manslaughter and a drug fuelled rapist of a three year old girl is sentenced to ten years and sternly told a non-parole period of five years will apply, it might be time to consider whether those elected to protect our values have become too entangled in their own political welfare, as opposed to ours. Keep smiling! Trev.