The great exit didn’t come as much of a surprise to me, or (much to Emily’s chagrin) that bigger disappointment. In terms of social services, England’s been bursting at the seams for some years, so something had to give.

It’s all very well and good for Scotland and Northern Ireland to protest, but both have little or no overpopulation worries; therefore they largely escaped the stress caused by the huge influx of foreign workers and refugees adding to an already strained job market. It could be argued that the home counties and the west country, with little heavy industry and high property values, enjoyed much more benefit from the membership than their northern counterparts, hence the backlash. 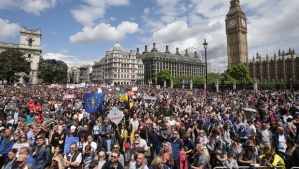 Demonstration in Parliament Square against the result of the referendum.

The cries of foul play over the result of the referendum suggest that wealth and class still play leading roles in English decision making. The outrage from the stockbroker belt is almost comic in irony; such folk are highly unlikely to turn up in the dole queue and tend to make money regardless of wind direction, political or financial. Further north, communities like Bradford, Hull and Leeds face a harsher reality, job shortages, overcrowding and a tired health service aren’t much to thank Europe for, small wonder they voted ‘out’, hoping perhaps that, in future, decisions affecting their well-being will be debated in the House of Commons rather than negotiated in Brussels.

Boris Johnson, one of the leaders of the Leave campaign, who now blames the government for not having a plan for after Brexit.

Dreams of a unified Europe are nothing new, but they’ve all failed, just as this one will; there are just too many ingredients to fit in one pot. England is the first to go and it can’t be too long before Germany and France are forced to accept that propping up a raft of poorer countries will eventually affect their own living standards. It might take a few years, but Britain will bounce back, hopefully with a better plan from Westminster to solve the problems at the bottom end of the ladder. In recent years, politicians have reverted to the 19th Century practice of distancing themselves from lesser mortals, but if the result in Britain is anything to go by, it’s wake up time! They asked the question and received an honest answer; all very healthy I would have thought and perhaps long overdue. Happy days. Trev.

← Assessing the damage by Trevor Plumbly
What has the referendum done for us? by Angela Caldin →