Boules in a London park by Angela Caldin

A few days ago, I was introduced to the gentle sport of boules in Palewell Park, East Sheen. An unlikely place to find this typically French game being played, I thought, but it turns out that boules is very popular indeed in this country and there are geographical leagues and competitions a-plenty. 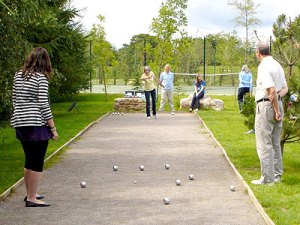 The idea of boules is that two teams play against each other and players throw hollow metal balls as close as possible to a small wooden ball called a cochonnet. The game is normally played on a rectangle of hard dirt or gravel called a terrain, but can also be played on grass or other surfaces.  Similar games have been seen throughout history as far back as Greek and Roman times. The current form of the game originated in 1907 in La Ciotat, in Provence in southern France, invented by Jules Lenoir, whose rheumatism prevented him from running before he threw the ball. The length of the pitch or field was reduced by roughly half, and the moving delivery was replaced with a stationary one. It is sometimes known as pétanque,  a name which comes from la petanca in the Provençal dialect of the Occitan language, deriving from the expression pès tancats, meaning “feet together” or more exactly “feet anchored”. I was a bit disappointed by this as I had always assumed the word came from the French péter meaning to fart.

How the game unfolds

A game consists of several mènes. The word mène is usually translated into English as “end” or “round”. An end consists of the throwing out of the cochonnet, followed by the two teams throwing their boules. After both teams have thrown all of their boules, the team with the boule closest to the cochonnet wins the end. The winning team scores one point for each of its boules that is closer to the cochonnet than the opposing team’s closest boule. That means that the winning team could in theory score as many as six points in an end, although a score of one or two points is more typical. As the game progresses, each team accumulates points until one of the teams reaches 13, the winning number of points.

Qualities of the game

As I said, boules is in some respects a gentle game. There is no running or athletic manoeuvring, just walking from one end of the terrain to the other and throwing the boule underarm from a standing position, gently bending the knees. (In fact, that’s where I’d assumed that the farting came in.) But there is a more cut-throat and vicious side to proceedings: seasoned players with a good eye can toss their boule instead of rolling it, in order to bounce another player’s boule out of its position near the cochonnet. This is known as a high lob or portée and produces a gloating gleam in the eye of the lobber if it succeeds. The game has also produced some fundamental wise sayings, one of which is boule devant, boule d’argent (A ball in front of the cochonnet is a money ball.)

Boules is a game for all ages and for the family, though it has to be said that nearly all those gathered in Palewell Park a few days ago were no spring chickens. It is certainly great fun and even people who might have difficulty walking can develop a sure aim as they bend their knees and swing their arm. If the sun shines in a brilliant blue sky while a gentle breeze wafts through the trees and over the terrain, it’s a joy to see the smiles on people’s faces and hear the gentle banter between the opposing teams.