Posted on November 2, 2016 by talkaholics

From rationing to abundance by Angela Caldin

I was born in 1947, two years after the end of the second world war, when food was still rationed. Bread, potatoes, tea, sugar and eggs were all on ration. To buy most rationed items, each person had to register at chosen shops, and was provided with a ration book containing coupons. The shopkeeper was provided with enough food for registered customers. Purchasers had to take ration books with them when shopping, so the relevant coupon or coupons could be cancelled.

People were expected to manage with one egg a week, about 200 grams of meat, bacon and cheese each, and what we would today consider to be a minute amount of butter. Sugar, marmalade and sweets were all on ration. The result of all this deprivation apparently, was a nation much healthier and leaner than we are today.
In our house in Manchester in the 1950s and 1960s, meals were simple and followed the same pattern: nearly always meat and two veg accompanied by a cup of tea and a slice of bread and butter or marg. Fish sometimes made an appearance, but only on Fridays. Fish and chips from the Chippy were a favourite, always wrapped in newspaper. Pasta was a complete unknown, curry was a surname, olive oil was kept in the medicine cabinet, a takeaway was a mathematical problem and pizza was something to do with a leaning 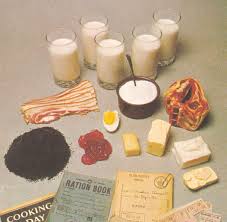 tower. Nothing ever went off in the fridge because we didn’t have one and a Big Mac was something you wore if it was raining. In 1964, I spent the summer in Paris working in a hotel where I learnt how to make a vinaigrette dressing with olive oil and wine vinegar which I thought was the height of sophistication. When I got home I made it for my mother to try: she pronounced it the most revolting concoction she’d ever tasted, though she thought nothing of pouring malt vinegar over cucumber slices for our Sunday tea.

In the late 1960s and 1970s, as people began to travel in Europe, the popularity of Italian dishes grew. A recent survey has shown that adults in the UK now eat an average of 75 grams of pizza every week, while the consumption of pasta has almost tripled over the last four decades. By contrast the consumption of baked beans in tomato sauce has dropped by a fifth. We now have the opportunity to eat foods not only from Italy and Europe, but from almost every corner of the world. The grocer and butcher who dealt with ration coupons are long gone, to be replaced by supermarkets stocking produce from every country you can think of (well, in the UK anyway). What’s more, you can do your order online and they’ll come and deliver to your door the next day. The latest development here in NZ is My Food Bag, a home delivery service providing customers with ingredients and recipes to cook meals. You don’t have to think about what you’re going to have for dinner five days a week because all you need has been weighed and measured ready for the selected recipes. This is what we’ve had in our house this 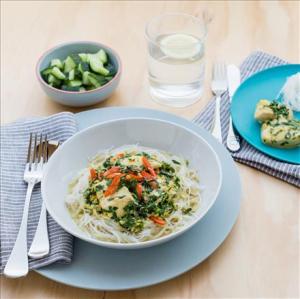 week:
• Coconut poached fish with vermicelli noodles
• Chicken and pasta bake with salad
• Pork sirloin katsu with Asian rice salad
• BBQ butterflied lamb leg with spring potato salad
• Green pesto and cream cheese pizzas with salad
All delicious and as far as I can work out, not expensive. I don’t know what my mother would make of it, she who, during the war, grew parsley in the garden and made it into sandwiches when the rationed food ran out, and she who, because she gave away her one egg so that her neighbour could make a birthday cake for her daughter, acquired a lifelong friend.

One Comment on “From rationing to abundance by Angela Caldin”