Prince Harry and a modern monarchy by Angela Caldin

Prince Harry has been in the news recently, giving a lengthy interview to Newsweek in which he talks about what it’s like for him being a member of the royal family. 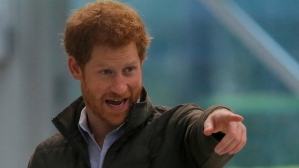 There’s no doubt that he’s achieved a great deal in his young life: serving in the army in Afghanistan; founding the charity Sentebale with Prince Seeiso of Lesotho to help vulnerable children in the country which has the second highest HIV rate in the world; being patron of the anti-mines charity the HALO Trust which pursues his mother’s goal of ridding the world of land mines; promoting sport in deprived areas; launching the Invictus Games and raising money for injured servicemen; speaking out about depression and mental health issues.

The quest to be modern 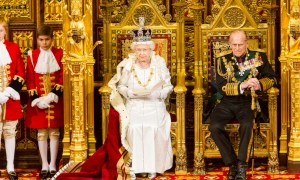 It’s an impressive list, but he has another stated aim which is in essence less achievable. He told Newsweek that he, William and Kate ‘are involved in modernising the British monarchy. We are not doing this for ourselves but for the greater good of the people…. Is there any one of the royal family who wants to be king or queen? I don’t think so, but we will carry out our duties at the right time.’ My question is this: is it even possible to modernise a monarchy? A monarchy is by definition a hereditary concern with the position of queen or king acquired through birth and certain rules of succession. It has nothing to do with democracy or merit and everything to do with archaic institutions.

Suggestions for modernisation might include the following: steps could be taken to reduce the pageantry on royal occasions, the number of royal palaces could be halved, some minor royals could be removed from the civil list and be encouraged to get jobs, young royals could attend ordinary schools rather than Eton and they could all do their own shopping as Harry says he does already. But such measures would only amount to tinkering round the edges if the main tenet of inherited title, wealth, pomp and circumstance remains. 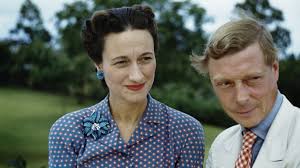 It seems that when he was younger, Harry would have liked to get out altogether of the royal goldfish bowl and do his own thing. There is a precedent for this: in 1938 King Edward V111 abdicated the throne in order to spend his life with the woman he loved, twice divorced Wallace Simpson. He decided not to put duty before personal satisfaction, thus earning the disapproval of a large section of the British public. His brother George V1 (father of the present queen) took over and many believe that the strain of being king brought on his early death. Princess Margaret, on the other hand, who fell in love with divorced Group Captain Peter Townsend, 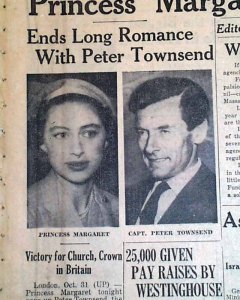 chose not to flee the comfort of the royal nest and marry her lover because she would have had to give up all royal privileges and income and become a commoner. This is what she said at the time: ‘I have been aware that, subject to my renouncing my rights of succession, it might have been possible for me to contract a civil marriage. But, mindful of the Church’s teaching that Christian marriage is indissoluble, and conscious of my duty to the Commonwealth, I have decided to put these considerations before any others.’ Duty comes into it again, just as it does for Harry, or is it rather a fear of being able to manage in a world without palaces and position.

I don’t think you can modernise something that is the antithesis of modern, that is intrinsically archaic, that passes status down from father/mother to son/daughter, that has no real power but requires a great deal of money to keep it going, that is deeply mired in outdated traditions and costumes and that demands an adherence to a dubious concept of duty.