When we moved to our small new home, I vowed that we would never again buy any flat pack furniture. Absolutely no need as we had all the furniture we could possibly want. The days of puzzling and sweating and getting short tempered over bits of white MDF were behind us. 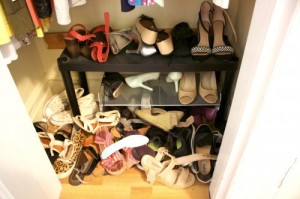 Everything was going well under the new regime until I got exasperated with the large pile of shoes which had accumulated in my wardrobe. What was needed, I felt, was some shoe shelving which could live in the (admittedly tiny) hall and where the shoes could be housed in neat and serried rows. Onto Amazon where I found pages and pages of shoe shelving of every kind: plastic, metal, bamboo, not to mention wood. But most of the shelves, though neat, left the shoes exposed, so to my mind the final effect was a bit raggedy. Then my eye fell upon a clean-lined, white shoe tidy with opening hinged drawers upon which the shoes could rest and could then be closed, hiding the shoes from view. Perfect, I thought, and ordered the unit with one click, only £21. The price should have alerted me; I realised too late that this was not a ready-made; it was a definite flat pack with all the angst that that entailed.

The cardboard pack lay around in the hall for a day or two, until my husband, who had cleaned the downstairs floor and was in tidying mode, said why don’t we have a go at this? Alarm bells rang in my head, but as I wanted the package out of the way as much as he did, we set to. Right, he said, let’s identify the pieces and count the screws. First stumbling block reached: he likes to meticulously count, label and separate everything while I prefer to just plunge in and see how it goes. We were two screws short. What to do? He thought we might send it back, but I thought we could economise on screws as we went along. A lot of the pieces were extremely similar and hard to identify. He thought we might wait until Monday and ring them up for advice while I thought we should make a start and then muddle along.

He nobly agreed to muddle along and we made great progress with the two drawers. But when it came to the back with two bits of hardboard that were meant to fit into a cross strut, the piece identified by the instructions and by Hugh as being this cross piece had no accommodating grooves and was clearly not fit for purpose. I gazed at the remaining oh so similar bits and spotted that one had grooves either side and might be the one needed. Hugh and the instructions were both wrong and my scatter-gun approach totally vindicated! I bit my lip and refrained from gloating while he fulminated about the useless instruction writing people.

Next problem was the small plastic drawer stoppers which had to be inserted into the side struts into a ready-made hole. The stoppers had threads so should have just screwed elegantly in, but no, they fell feebly out of the opening

every time. I said I was going to hammer them in. Hugh went pale with shock and said that was totally out of order. I put some tennis on to distract us and as the rallies got more and more tumultuous, we got more and more sweaty and exasperated. When he went upstairs to the loo, I got out the heavy hammer, and holding the errant piece of plastic with the pliers, whacked it in.

When he came down, I could see that he made a superhuman effort not to remonstrate. He swallowed hard and helped me whack in the other three bits.

Finally, the whole structure was assembled – and it had only taken three hours! On one of the hottest afternoons of the year! Our backs and our knees were twinging with the effort of crawling around, bending and stretching. But the shoes fitted in a treat, tucked away neat and tidy in their new home.

Memo to self: no more flat packs ever again (unless just the right thing to fit in that little corner turns up on Amazon).

One Comment on “The last flat pack by Angela Caldin”