Collected thoughts about Christmas by Emily, Trevor, Susan and Angela

The Christmas debate according to Emily

I had a rather robust discussion with my three fellow bloggers recently about Christmas. My outtake from it was that the learned trio don’t believe in spinning the myth of the fat bloke in the red suit to kids, and that lying about it to children is wrong and will inevitably lead to disappointment. I got quite annoyed about it and tried my hardest to think of an argument to put forward to explain why I don’t mind perpetuating the Santa clause, which to my mind, has brought joy to many thousands of children worldwide. 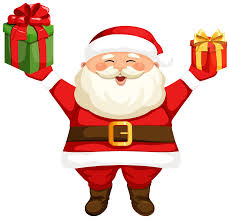 It’s taken me a couple of weeks to think about why I don’t mind leaving out the carrots and mince pies on Christmas Eve. My lot simply love it. They embrace everything about Christmas, from the presents, to the anticipation of catching a glimpse of the big man himself. In the lead up to the day, calendars are opened, there’s a Christmas dress up parade at school, secret Santa gifts are exchanged with classmates, mince pies (or boxes of chocs in my house) are consumed, there’s an air of magic about it all and it’s great family fun.

In this world of doom and gloom, with lunatics running countries, civil wars raging, a huge divide between the haves and have-nots, daily atrocities where inhuman things are carried out and human life is snuffed out in the blink of an eye, I really can’t and don’t begrudge those who want to keep their children as children for longer. Innocence is sometimes all we have left, and that in itself has a limited shelf-life. For all these reasons, dear readers, I’m a believer.

So to all you believers and non-believers, here’s hoping you have a happy and healthy holiday. Rest up and enjoy time with your loved ones. And, if you’re reading this Father C, apologies in advance if the beer left out for you is drunk by the time you drop in.

As a lad, I always disliked Christmas because firstly I never got what I wanted and secondly other kids got more than me. Thus, far from being a season of peace and goodwill, it was a time for childish resentment and envy.

Parents and teachers alike encouraged us to write to Santa, but by the time I was capable of putting thoughts to paper, I was far too cynical to bother. Imagine: ‘Dear Santa, How come last year Jumbo Mercer got a train set, Nobby Clark got a new bike and I got socks and underpants? Yours sincerely, Trevor.’ The reply might have gone thus: ‘Dear Trevor, Jumbo and Nobby both have fathers who help provide such things, so suck it up! Regards, Santa.

Reality soon dispelled the myth of the jolly fat man and his vertically challenged gang dropping goodies down the chimney. Christmas for us wasn’t exactly Dickensian misery, but as close as I wanted to get. However, life tends to move the goalposts as you get older and I’ve enjoyed Christmas through my grandsons, but like all kids, their excitement will mature into expectation and comparisons. 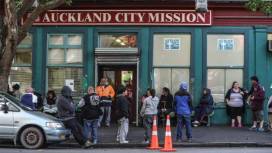 Meanwhile, I’m being bombarded by 40, 60 and even 80% off everything destined to pollute; pretty soon they’ll be paying me to take the crap off their hands. Humbug? Yep! But then I think about the City Mission, the thousands of dollars donated and the hundreds volunteering to make it special for the homeless and helpless. Bugger the old boy in the red suit, that’s what I call Christmas.

Recently I’ve come across a few stories of real Christmas spirit.  These experiences act as a kind of antidote to the negative feelings I get when I go to the mall and see hordes of people shopping, shopping, shopping for presents, many of which end up not really wanted and being bought just to play along with the hype of Christmas.

One story was told by a friend who lives in a retirement village where the residents were looking forward to a visit from the choir of a local primary school.  The residents bought presents for the number of children expected and when the kids arrived, sat back and enjoyed the choir.  However, when present time arrived, the children thanked them, but said they were going to take all the presents to the City Mission. 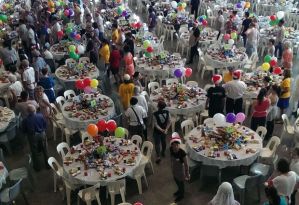 Christmas Day lunch put on by the City Mission

One of my older friends, 88 last birthday, who doesn’t drive, hopped on a bus to go up to the City Mission to make a personal donation.  Her own kids are doing well in life, so she chose to help the Mission families have a happy Christmas.

Another friend said he was fed up trying to cope with his iPad and iPhone and was ready to chuck them.  I reminded him of the Mission and he at once packaged the devices up complete with chargers, wiped of all private data, and asked me to take them to the Mission along with a large money donation.  You can imagine how thrilled a couple of teenagers will be to get those for Christmas.  Who was that generous friend?  Our very own Trevor.

It’s an Aotearoa Christmas for all four of us, whatever our views concludes Angela

The usual vocabulary of Christmas cards and Christmas songs doesn’t apply here at the bottom of the world. Snow, ice, sleighs, jingling bells, robins, toboggans, snowmen with carrot noses, none of these are relevant, because in the words of the song:

Under a pohutukawa tree

Celebrations in the sun

Bringing joy to everyone

The pohutukawa tree is the most graceful of trees which produces a glorious covering of red flowers in December – it’s known as the NZ Christmas tree. But old habits from the Northern Hemisphere die hard and many people have a Christmas tree in their living room decorated with baubles and coloured lights. There’s plenty of tinsel around, as well as lights blazing in street decorations, even though the sun is beating down until eight in the evening. Santa still clumps about in his heavy black boots, dressed in a thick red suit, while many people head to the beach in the skimpiest of attire.

I love a summer Christmas and don’t find it strange to sit outside eating barbecued food with salads followed by a light and fluffy Pavlova. I can happily do without stringy turkey, starchy bread sauce, pigs in blankets and the dreaded sprouts, not to mention stodgy Christmas cake and even more turgid Christmas pudding. Some people I know yearn to sit by a roaring fire with the curtains drawn, stuffing themselves with mince pies, but I have too many memories of grey and chilly Christmas Days going for a dejected walk at half past three in the gathering gloom.

I hope that, as in the song, these celebrations in the sun will bring joy to each and everyone of us and to anyone who happens to read this blog.

3 Comments on “Collected thoughts about Christmas by Emily, Trevor, Susan and Angela”