I went to a lovely dinner the other night, a celebration of someone’s seventieth birthday. It was a wonderful occasion with delicious food, delightful people and lots of fun. 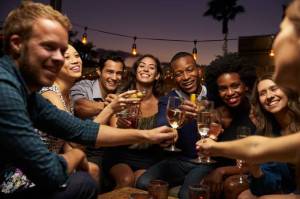 But, as is normal for me towards the end of such gatherings, as other people were boisterously laughing and whooping with ever-increasing mirth, I began to wonder how soon I could leave and make my way home to the comfort of my bed.  There’s a simple reason for this turn of mind: the other guests were drinking alcohol and I wasn’t, which means there always comes a point in the evening when, as a non-drinker, I get left behind in the amusement stakes while everyone else laughs uproariously at the least provocation.

It’s right to say that in many civilisations, the mind-altering drug of choice is alcohol, made from whatever vegetable, grain or fruit is available; an accepted part of all kinds of rituals, ceremonies and social interaction. In

the majority of countries it is legal; countries that currently outlaw alcohol are in Africa, the Middle East, and South Asia and very often these countries have a booming black market trade, just like the US did during prohibition. In addition, the alcoholic drinks industry has a great track record in the relentless promotion of its product, managing to convince us that alcohol is good while other drugs are bad.  In both the UK and NZ, few people would dream of having a party or social gathering without a plentiful supply of alcohol; many of those attending would reach for a drink on arrival to lift their spirits, loosen their tongue and lose their inhibitions, while many others could not imagine surviving a social situation without the boost that alcohol brings.

And yet, in the UK, alcohol is now the leading cause of death in men under 50 and will in all probability be the

leading cause of death in women under 50 in the next three years or so. Alcohol can cause or worsen a variety of medical conditions including anaemia, cancer, cardiovascular disease, cirrhosis, dementia, depression, gout, high blood pressure and nerve damage, not to mention the aggressive violence it can unleash as well as the days lost through hangovers and the injury to others that driving while drunk can cause. If it’s so bad for us, why do we continue to reach for it so often and rely on it to raise our spirits? I stopped drinking when I realised that instead of one glass of wine cheering me up, the urge to finish the bottle was making me argumentative and aggressive, putting me at risk of harming others by driving while over the limit and serving to blot out things that were making me unhappy rather than face up to them.

Perhaps there’s some nugget of truth in my realisation: the initial glass or two gives us a feeling of relaxation and expansion, of unity with our friends, of excellence, of being at ease with the world and of being truly present. Then we make the assumption that drinking more will heighten these happy sensations instead of realising that it can so easily lead to alcohol becoming a crutch, to having a damaging effect on our lives and the lives of our loved ones.  We could, instead, ask ourselves how we might make changes in our lives in order to experience all the time the short-lived euphoria of the initial glass. Those changes, starting with giving up alcohol, can lead to an unexpected sense of liberation.

2 Comments on “Alcohol: the devil’s brew? by Angela Caldin”