In the slimelight by Angela Caldin 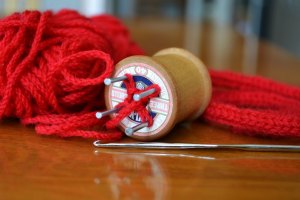 When I was a child in the 1950s, we had various ways of passing the acres of unoccupied time, including cat’s cradle, jacks, yo-yos, marbles, plasticine and something involving an empty cotton reel, four nails and some wool which was called French knitting. This produced a long thin snake of woven wool which you could spiral round into little mats or even a hat if you went on long enough. Things were much less sophisticated in those far off days.

French knitting is not unlike the recent craze of loom banding, though it is a great deal simpler. Loom banding requires much more complicated equipment – a plastic loom for a start, umpteen packets of different coloured 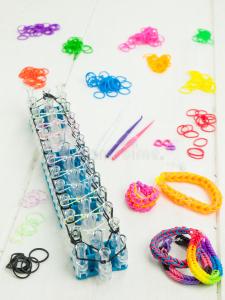 loops and access to YouTube videos to tell you what to do. My granddaughters were quite heavily into loom banding for a while and their colourful artefacts could be found in all areas of the house. But this fairly creative craze has given way to a new one – the making and messing about with slime. There are various recipes for making slime but my granddaughters use one which combines shaving cream with PVA glue, borax and food colouring. The resultant material is stretchy and pliable, a bit like very elastic dough which can be kneaded and elongated to your heart’s content as long as you keep it to the optimum consistency. If it gets too wet or too dry, it can break up into sticky threads which cling to your fingers and are a nightmare to get back in harmony.

A good thing or a bad thing?

I’m not sure what to think about slime, so I thought I’d pause for a while to weigh up its pros and cons: 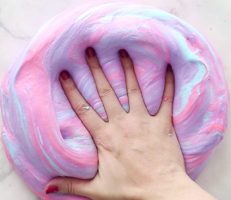 By this reckoning, there are more pros than cons, though that last con is more than a bit of a killer, unless the wonder plastic-guzzling enzyme that’s just been discovered will be able to cope with slime as well. And, though slime is a worldwide obsession at the moment, soon, like any other craze, it’ll be on its way out and I’ll be trying to work out how I feel about the next thing. Whatever it is, I’m sure it’ll take me by surprise.