Matters of life and death by Susan Grimsdell

Choice is the word of the week it seems.  Voting in Ireland about whether or not to permit women to choose to have an abortion in their own home town or to be forced to go overseas for it, and voting here in New Zealand about whether to let everyone choose when they want to die.

It seems a no-brainer to me.  I wouldn’t for one moment assume I have the right to make those decisions on behalf of anyone else, when that person is perfectly capable of making their own decisions.  After all, these are big life-changing events.

I feel especially strongly about the end-of-life issue.  My father contracted Guillain-Barre disease at the age of 80 and over a period of 12 hours he went from being unable to walk to the loo in the night (whereupon my mother called the ambulance), to being in intensive care able to move only his eyes.  This is my highly articulate dad, a great reader, an intelligent, observant man.

Those who recover from G-B report that the brain stays conscious and aware.  My father was trapped in his body – locked-in.  After another 12 hours he couldn’t even move his eyes, and was totally unable to communicate, but he was still alive.  How terrified he must have been.  I can hardly bear to think of it even now.  Those who talk about “palliative care” could have no idea what locked-in would be like. 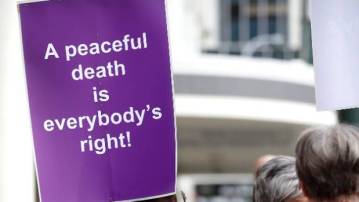 In Dad’s case, the doctors said they could keep him alive, but that he would always be on life support. I and my small family (3 of us, that’s it) were horrified at this and said that’s the last thing he would choose for himself.   Shortly after we had assured them of that, Dad died.

I am convinced the doctors had mercy on him and helped him to die.  But this isn’t fair – the doctors were taking a risk, defying the law, for the sake of humanity and kindness.  They shouldn’t have to.

The right to choose

We should all have the right to decide, “If something like that happens, please let me die.”  And it should be legal.  To me, it goes without saying.  I hope our parliamentarians agree, and vote “Yes” to end-of-life choice, just as Irish people overwhelmingly voted yes last week.

← A good look by Trevor Plumbly
What’s in a name? By Angela Caldin →

One Comment on “Matters of life and death by Susan Grimsdell”