In hospital again by Trevor Plumbly

Any resemblance in the following comments to anyone living, dead, or en route in either direction, is purely a matter for their own estimation.

Yep I’m back! As a result of a nasty fall, various bits of me have decided to freeze up, requiring the attention of a neurologist. Thus here I am flat on my arse, being poked, pulled and prodded by Doc One, a brusquely efficient, but otherwise charming woman, who vaguely reminded me of an absent-minded Miss Jean Brodie. After whacking me a few times with a miniature panel beater’s hammer, she toddled off to ‘consult’. Even though cloaked with the benefit of consultation, Doc Two did not inspire confidence; his prodding seemed relevant, but I felt the hammer whacks seemed a bit more personal than Doc One’s. He was monosyllabic, almost grumpy and seemed more suited to the role of fish filleter than gentle healer. Mental picture = short, underdeveloped and unhappy; obviously not of the chosen.

To some, nursing is a calling, to others it seems more of an incipient whisper telling them it’s the only game in town. Nurse One was of the Nightingale breed, floating from bed to bed, attentive and quietly reassuring; in short, a gem! Whatever they’re paying that lady, it ain’t enough. Nurse Two was a sheer delight, totally uncoordinated but 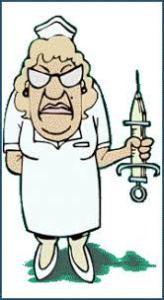 possessed of the sweetest nature possible. Since I needed help eating, breakfast was an adventure: porridge had a consistency and temperature more suited to a Scottish internment camp, toast was fed upside down from a sideways angle, often leading to me wearing about as much food as I actually consumed, every miss accompanied by a slight giggle and ‘I’m so sorry’. Mental picture = petite, confused but happy and a delight to have around. Carry on nurse! Nurse Three was of the dictatorship school; charts were the manifesto, patients were subjects and doctors were worshipped at the altar of orderliness. Mental picture = Zena Warrior Princess armed with giant hypodermics labelled ‘Protocol’ and ‘System’.

Doc Three would arrive at the same time as breakfast and time his visit long enough for the butter to congeal and the tea to grow cold. Despite his enquiries regarding my general health, I got the impression he was more concerned with his own day than mine;

‘contained’ is the word I’m looking for. Such people defy sight-challenged illustration, it takes a special talent to appear concerned yet remain aloof at the same time. After he left, I battled with the mental picture before producing: medium height, medium build, conservative dress and guarded speech. Forget Auckland Doc Three, bugger the hoi polloi; with your talent go straight to Harley Street where a career in Royal Gynaecology awaits.

I scrawled some of these remarks prior to and after my operation, the rest I dreamt (I think). As with most things, the experience was somewhat mixed. To those who coped with coping with a curmudgeonly old git, thank you most sincerely. To those who didn’t, please see the opening disclaimer. Cheers, Trevor.

One Comment on “In hospital again by Trevor Plumbly”