Going round in circles by Susan Grimsdell

I’ve been feeling giddy lately – my brain is spinning, and here’s why.  It has come to my attention, through an amazing book I’ve been reading, that most of the problems of the world – and there are many – are caused by us poor humans not realising that we think in circles and vicious ones to boot.

Starting with a very obvious example – black people in America were all slaves at first.  When slavery ended in 1865 do you think black people then started to flock into universities to get good degrees and start to make it in life?   Um – no, actually. 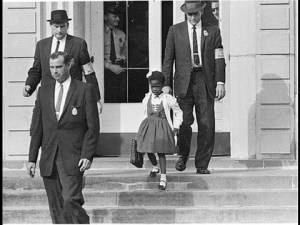 The first black pupil to attend an all white school in southern USA.

As we know, it took generations, over a hundred years in fact, till black kids in the South were even allowed in white schools.  Most people believed throughout all those years that black people were different – lazier, less intelligent, more violent, sexually promiscuous, prone to theft, rape and disease.  These assumptions were verified by research that counted the number of achievers and – funny this – found that black people were very poorly represented at the higher levels in just about every field of endeavour. There you go – they’re not achieving, case proved.

In fact, poor performance of black people is the result of massive discrimination against them for hundreds of years.  You don’t go from slavery to CEO of General Electric overnight and you don’t go at all if discrimination and racism never end.

Where the circle comes in is that, to this day, many people look at the poor record of black people (insert here: women, Aboriginal people, Maori, North American native people, Inuit, lower caste Indians, you name it) and use it as evidence that they can’t hack it.  It’s time we understood that being black (or a woman, Aboriginal…etc) has very little to do with why people don’t succeed.  Being discriminated against, given no chance and labelled with negative words has everything to do with it.

We have to stop getting things the wrong way round.  Stop mistaking the result for the cause.  Maybe then my poor head will stop spinning and I’ll be able to see a straight road ahead.

By the way the book is: “Sapiens”, by Yuval Noah Harari.  Sapiens is us – homo sapiens, and it’s our story starting from when we first came out of the trees.

2 Comments on “Going round in circles by Susan Grimsdell”