Now, I know that looking at me you wouldn’t think that personal grooming would be at the top of my priority list, but I’m afraid you would be wrong. Whilst I seem to have missed out on the ‘female gene’ when it comes to having an interest in men, shopping, clothes, make-up and The Batchelor, I have always been somewhat preoccupied with hair, both growing and removing it.

During my teenage years, I experimented with everything from Sun In – natural hair highlighter that was great if you like orange streaks in your hair – to good old-fashioned dirty peroxide – those chemicals should never be mixed together never mind put anywhere near your scalp!

Much hairdo about nothing

There followed a number of bad hairdos which really should have been hair-don’ts. The flat-top, which should have been renamed the unflattering top. The wonky fringe a la Phil Oakey from The Human League (why, why, why?), before moving on to grow my hair and have a permanent wave –think Corrie’s Deidre Barlow circa the 1980s.

In between all of that was the removal of unwanted hair. From shaving my legs, pits and bits when I was far too young, to the pain of wax strips, the strangeness of depilatory creams, odd-shaped electric shavers and (more often than not) borrowing my Dad’s razor. The biggest regret? Well, that would be letting Louise Roofe (my elder brother’s beautiful girlfriend way back when) pluck my eyebrows. If I give my daughter only one piece of advice that I would like her to follow for the rest of her life, it would be ‘Never, ever pluck your eyebrows.’

Where does all this leave me today? Well, I’m still plucking, tweezing, shaving, waxing and threading. The hair on my head refuses to grow downwards, and will only mushroom outwards, and I have hair in places which I cannot even mention on this family friendly blog. What I have discovered is where to go to keep the hair I want, and where to go to get rid of the hair I don’t. 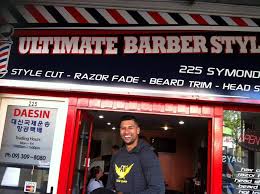 When it comes to my Barnet, I have long been a customer of a small barber’s just up the road from me. The outfit is called Ultimate Barber Styles, and is run by Jack (who I think is Iranian) and an assortment of his seven brothers (dependent on when you pop in). Thinking about it, perhaps they should rename themselves, Seven Styles by Seven Brothers (boom tish). Anyway, if you’re used to going to a hair salon, then you won’t have a clue about how things roll at this barber’s. For a start you don’t book an appointment. You just turn up, and wait. Although the Brothers Trim are fairly swift, if they’re putting decorative lines into someone’s head, it can take a while. Which, to be fair, is fully justified considering they’re using a very sharp razor blade right next to a very important part of your anatomy.

It’s customary (if you’re a bloke) to have some sort of bro handshake when you walk in, before taking a seat and watching scantily clad pop singers on the TV screens. Bless him, when I go in with my eleven year old son (who always has a Ronaldo haircut), Jack switches channels and puts on international football.

Either Jack or his youngest brother have the honour of razoring and snipping my locks, and a mighty fine job they both do. Quick and with talk focusing on football or Jack’s baby daughter, we dispense with the usual ‘Where are you going on holiday?’ conversations and cut to the chase as ‘twere.

And my favourite bit? At the end I get a hot towel to clean away all the unwanted bits of hair that are stuck to my neck and face. At $25 and taking fifteen minutes, I always walk away delighted with my experience. And before you enquire, I never get asked ‘Something for the weekend?’ and instead am offered a free bottle of water. What is there not to like?

So that’s the upside of this blog. Brace yourselves, we’re moving onto the downside…I won’t tell you where I go for my hair removal services because frankly, they are shocking and I couldn’t recommend them to anyone. Why do I continue to go there?  It’s cheap and just around the corner and they’ve always got an opening (please insert own joke).

Eyebrow threading – this is not me by the way

Curl up and dye

For starters they refuse to wax my eyebrows and will only thread them. I don’t actually know technically how threading works but it involves a roll of cotton, with one end in the ‘technician’s’ mouth and a whole lot of pain coming out of my gob. Hurting like buggery would be an understatement. What’s worst is that when I cry, the woman laughs. It’s like water torture, only worse and I’m paying for it. I have refused to let her thread my upper lip, and have persuaded her to use hot wax instead, which is only marginally less hurty than the threading.

When it comes to downstairs, again the hot wax comes out, and I always feel so wimpish screaming in agony. I’m sure I’ve seen her smiling as I writhe in pain. But what choice do I have in a country where you always have to have a swimming costume at the ready? It’s mohair or no hair, and no one wants to look like Susan Boyle when lying at the beach.

Ah, the everyday trials and tribulations of being a modern day hairy woman. Roll on winter when I can cover my bonce with a beanie and let everything else grow au naturel.

If you have been affected by any of the issues raised in this article, the following may be able to provide helpful advice and support – Ultimate Barber Style, 225 Symonds St, Eden Terrace, Auckland 1010 and XXXXXX Beauty Salon (nope, I can’t name them, when you go behind the curtain to undress there’s always a big bucket of hot wax residue housing other patrons’ pubes). As I mentioned, they’re cheap!