The granddaughters have discovered the Beatles. In a BIG way. For the last two days of the summer holidays, before the new school year starts here in NZ, the house has resounded to the rhythm of those enduring songs with the granddaughters joining in with gusto. I’m amazed at how quickly they’ve learnt all the words.

I think it all started with a recent showing on NZ TV of Carpool Karaoke – When Corden met McCartney in which Paul went around his old hometown of Liverpool, pointed out the church where he had been a choirboy, visited the barber’s shop on Penny Lane, went back to his old home and finally played a gig in a pub to startled locals. Songs that they sang included Baby you can drive my car, Penny Lane and Let it be. 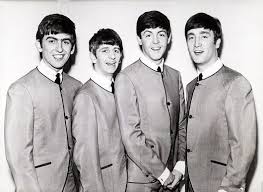 Those of us who grew up in the sixties are more conscious of the progression from the first songs like Love me do in 1962 and I want to hold your hand in 1963 to the more innovative songs on the Sgt Pepper’s Lonely Hearts Club Band album in 1967 and the White Album in 1968. I can remember while still at school seeing the Beatles perform Love me Do on the local news programme Look North and being completely blown away. Everyone was talking about it at school the next day – the collarless suits, the haircuts and the amazing sound, not to mention the lovely boys (especially Paul). Then when Sgt Pepper with its fantastic cover came out

in May 1967, I was at university and the whole of the summer term was dominated by the ground-breaking music, drifting out of students’ windows and throbbing out of the juke box in the Student Union – we had never heard anything like it before.

We know now that difficulties arose within the group quite early on, but for us then they were heroes. There were, of course, those more audacious souls who preferred the edgy music of the Rolling Stones and you could be robustly challenged as to which group you preferred.  I didn’t think much of the Stones then, found them too self-satisfied and harsh, but I’ve come to like them more as I’ve got older. I played some Stones tracks to the granddaughters though,  just to make sure their education is complete, but they were not impressed and quickly reverted to the Fab Four. 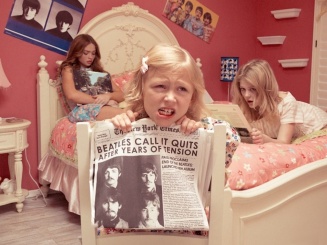 It was really only six years at most that the creative phase of the Beatles lasted and they finally broke up in 1970 with wranglings over artistic differences, financial problems and personal disagreements making it impossible to work together. But in those six years they produced a vast body of varied, enduring and meaningful work which delights young people fifty years later.

I see my granddaughters belting out Hey Jude and it is truly a splendid sight to behold. What a huge achievement for four boys from fairly humble origins to take the world by storm and create such riches for future generations.