The state of the nation by Angela Caldin

Yesterday, I had two interesting conversations which I’ve been pondering on overnight.

Donated tinned and packet food in a food bank

I was on the tube when I met a colleague from my days in the magistrates’ courts. He’s a defence solicitor and therefore sees on a daily basis and at first hand the poverty and deprivation experienced by many of those who commit petty offences. He commented wearily that food banks are just about the only growth industry in this country nowadays. It’s true that food banks are springing up even in areas which are traditionally thought of as affluent. The food that is given out is non-perishable so it is mainly tins or packets – there is usually nothing fresh and it is meant to last for about three days. Many of those who are referred have problems with benefit delays, particularly with universal credit and the five week wait for it to become payable. It’s possible to get an advance to help during those five weeks and I often ask myself if a loan can be organised, why not the universal credit itself. But it’s not just those on benefits who visit food banks, it’s working families who cannot make ends meet, it’s victims of domestic abuse living in hostels, it’s people with no fixed abode, it’s the elderly, it’s the asylum seekers. According to the Trussell Trust, which supports a nationwide network of foodbanks, more than 14 million people are living in poverty in the UK, including 4.5 million children. 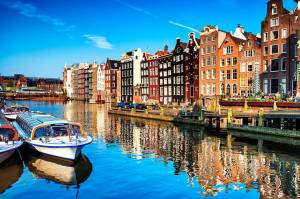 Amsterdam, a favourite place to relocate

Later, I was volunteering at The Felix Project which collects surplus produce from supermarkets and redistributes it to charities who turn it into meals for those in need. Over lunch, I was chatting to a corporate volunteer from a law firm: she and some of her colleagues were doing a voluntary day and were enjoying going out on the van and then sorting the fruit and veg collected. Her speciality was helping businesses negotiate the legal complexities of relocating to another country. I commented that she would be busy after Brexit on 31 October to which she replied that she was busy now and had already helped many firms relocate, Dublin and Amsterdam being favourite destinations. ‘Don’t believe it when they tell you it isn’t happening,’ she said, ‘because it most certainly is.’

I felt something approaching despair thinking about what had happened to this country during all these years of Conservative rule. Austerity has led to increased poverty and cuts in services, resulting in many of those affected voting to leave the EU, having been persuaded that the EU somehow rules us all. In actual fact, only about 13% of our laws come from Brussels according to the House of Commons Library.

Mr Blobby and the Blobbettes

On Tuesday I watched the debate with the five PM hopefuls perched on their bar stools with their threadbare plans and empty promises and wondered how it had come to this. John Crace in The Guardian hilariously described them as Mr Blobby and the Blobbettes. Very little was said about what they would do to relieve the gnawing poverty which is the day to day experience of so many. A good question for them would have been, ‘Why is the food bank industry growing, while other industries are leaving the country?’

One Comment on “The state of the nation by Angela Caldin”