I’m up in Yorkshire enjoying a few days immersion in all that is wonderful about this county including its down-to-earth people, its direct talk, its breath-taking landscapes and its wry humour.

Judging of the bulls under a lowering sky.

I should point out that I’m from Lancashire, a diamond of a county, but locked in a centuries old rivalry with its neighbour over the Pennines. Who remembers learning about the Wars of the Roses in the fifteenth century with the white rose for the House of York and the red rose for the house of Lancaster? As if to underline the futility of war, by the time they’d finished, the wars had eliminated the male lines of both families. In spite of all this death and destruction, the old rivalries still persist, as I have learnt to my cost through acquiring a son-in-law born and brought up near Bradford. He is of the opinion that there is no food more delicious than a Yorkshire pudding. I feel it would be churlish to tell him that this dish is nothing more than an extra thick pancake and that compared to the divine Lancashire Eccles cake it pales into insignificance. An Eccles cake is a small, round cake filled with tightly packed currants, made from flaky pastry with butter, topped with demerara sugar. 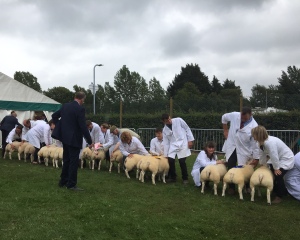 Yorkshire to the core

They say that you can take the man out of Yorkshire, but you can’t take Yorkshire out of the man and this is very true in my son-in-law’s case. He has taken himself (and our daughter) out of Yorkshire as far as he possibly could to New Zealand, but there he has founded a golf club named after his home town of Baildon. For his fortieth birthday, he chose the theme of flat caps and tabards with suitable Yorkshire beer. It’s more than likely that even if he moved to Antarctica, he would set up some kind of home from home in Shackleton’s hut.

Cows taking it easy in their stalls.

Today I was happy to put rivalry aside and to enjoy a glorious day at the Great Yorkshire Show. Great it certainly was – the whole thing was the size of a small village with stalls selling goods of every description from delicate wood carvings to agricultural machinery. Everywhere you looked there were food stalls offering snacks and dishes from all over the globe – impossible to go hungry. Capacious beer tents dispensed liquid refreshment to stewards, sheep shearers, judges, farmers, chain saw wielders and the general public. The map sent us on a bit of a mystery tour and it was some time before we stumbled across the livestock section, but what a revelation that was. There were hundreds of sheep of numerous breeds with curly horns, straight horns, long coats, shaggy coats, black, gingery, off white, all kept in straw-lined pens until it was the turn of their category to be judged. It was an amazing feat of organisation, reliant on the many young white-coated stewards to get them to the right place at the right time. It was the same for the cattle: so many distinctive breeds; each one groomed and primped to perfection for its turn around the ring.

My favourite of all was the sheep shearing competition – exciting to see the young farmers whizzing their shears so expertly over the immobilised sheep and managing to get the fleece off all in one piece. I couldn’t help wondering how they had voted in the 2016 referendum – I suspect the majority would have voted to leave the EU, though it’s fair to say that Harrogate, Leeds and York voted to remain. It’s also worth mentioning that there is sometimes talk of Yorkshire declaring independence; that would be a pity because then we might need a passport to attend the Great Yorkshire Show.