Confusion – the mess we’re in by Angela Caldin

There is confusion worse than death, Trouble on trouble, pain on pain.

This quotation from The Lotos-Eaters by Alfred Lord Tennyson sprang to mind as we started here in the UK on the new prime minister’s first week in power. He’d already promised that we would leave the EU on 31 October come what may, do or die, but he’d also assured us that the chances of leaving without a deal were a million to one.

Then on Monday, Michael Gove, the new Chancellor of the Duchy of Lancaster, who has been given a roving brief to oversee preparations for no deal across Whitehall, announced that work was taking place on the assumption that there would be no deal. When questioned about this, our new leader appeared to contradict its sentiment, saying that with goodwill on both sides a satisfactory deal would be achievable. Almost in the same breath, that goodwill seemed to evaporate quickly: Boris said that no new negotiations could take place until the backstop was abandoned, but the EU negotiators said there was no question of abandoning the backstop. Stalemate. 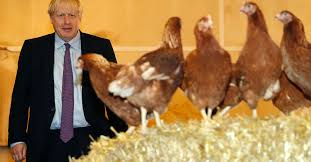 Spending seems to be no object for the fifty fifth PM who has promised money for more police, for schools, for housing, for the NHS and for any other major organisation which comes to his mind. We can therefore assume that austerity has finally come to an end. Under the period of austerity, the police forces were shrunk by 20,000, police stations were closed and crime increased. Now we are promised 20,000 new police recruits to repair the damage done by the shrinkage. Imagine the expense of recruitment drives, training and refurbishment of premises that this will entail. In Manchester, Mr Johnson announced that a high speed train would be built between Manchester and Leeds. He expected applause, but it was thin on the ground as the original Northern Powerhouse initiative had proposed a line joining Liverpool, Manchester, Leeds and Hull.

The latest wheeze is that the government will launch a new campaign to inform the whole country about no-deal preparations, with costs expected to run to about £100m. The main plank of the campaign will be a leaflet to go to every home assuring everyone that everything is going to be fine while also containing enough information to convince the EU that we’re prepared to go through with no deal. I wonder how many people will bother to read this leaflet and if they do, I wonder how confused they’ll feel.

The truth is we don’t know what is going to happen and the uncertainty is concerning for us all, whoever we are and whatever our occupation. There could miraculously be some kind of a new deal, or we could leave without one on Halloween; there could be a general election or Johnson could shut parliament down; there could even be a second referendum of some kind which might be the only sensible way to get out of the confused mess we are now in.

← Leaders of the US of A by Susan Grimsdell
Three score and ??? by Trevor Plumbly →