The miracle of the monarch butterfly by Angela Caldin

I’m in Pacific Grove, California, for a few days where I’ve witnessed a part of what has been called one of the greatest natural events on Earth.

In a large grove of eucalyptus trees called The Sanctuary, clusters of monarch butterflies cling like glowing autumn leaves to the branches. They arrive in late October to overwinter in the mild climate here, escaping the harsher winters in the north. They travel vast distances to reach the California coast in the west and the mountains of Michoacan in Mexico in the east.

In late summer and early autumn, a resilient, robust kind of monarch is born which can live up to eight months.  When daylight decreases in the north, these butterflies begin flying south toward their overwintering grounds, sometimes more than 2,000 miles away. The same butterflies are able to make this entire journey. When spring arrives, the monarchs migrate north again, laying eggs as they go. These monarchs move rapidly through their life cycle, flying further north with each generation. As many as five generations of monarchs may make the journey north, making this a unique migration: whereas in migrating species such as birds and whales, the same individuals travel the migration route year after year, monarchs migrating have never been to their destination before.

The need for milkweed

The population of this beautiful orange and black butterfly has declined on the California coast in recent years. This could be the result of two things: a reduction in the availability of milkweed and the effects of climate change. The female monarch needs milkweed to lay her eggs on because it’s the only thing her caterpillars can eat. If there is no milkweed, they don’t survive and increasingly it is being eradicated for farming and development. It’s important that the proper type of milkweed is available. Tropical milkweed flourishes all year round which keeps monarchs from migrating, and can cause an infection in the butterflies. Desert milkweed is the one that’s needed because it follows the seasons, just as the monarchs do.

Climate change is now recognised as a threat that may account for the fluctuating population – the number of monarchs overwintering along the California coast was reduced from an estimated 192,000 in 2017 to no more than 30,000 in 2018. The number roosting in Mexico, though, seems to be higher, so it may be that they are adapting by changing where they overwinter. The butterflies rely on environmental cues, particularly temperature, to start reproducing, migrating and hibernating, so a warmer, drier climate may be affecting their responses.

Interestingly, some researchers believe that, although some of the monarchs’ migrating populations may be dwindling, the species itself isn’t in danger of extinction because there are non-migrating populations throughout North America, Hawaii, some islands in the Caribbean and in our own New Zealand. 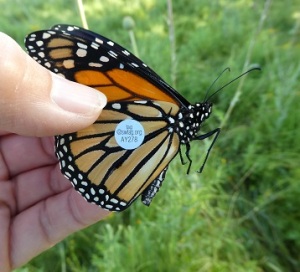 This amazing process leaves me in awe of these fragile creatures who make such a huge, instinctive journey across a vast country, relying on the sun and their own inbuilt biological compass which scientists believe senses the direction of the Earth’s magnetic field.