A long and winding road by Trevor Plumbly

Yep! I’ve read it. Years ago it was considered healthy reading for pre-pubescent minds. Back then, the hero Christian was the James Bond of religious literature, without the totties of course.

Like Fleming, Bunyan’s left his mark: even today the waffle-mob still refer to life as a ‘journey’, which is fine if you’re sitting on your arse in a sort of spiritual Rolls Royce, inspired by Christian’s trip to the Celestial City; most of us though, aren’t cut out for the A to B road.

The old stuff’s still there: sin, faith and doubt, but they’ve been tarted up a bit and I believe Bunyan’s hero had an easier trip than we’re having. Certainly he was tempted and he stumbled, but one look upstairs and he was back on the road again with apparently no physical damage, which leads me to conclude that divine help in those days was pretty potent. On the other hand, my Slough of Despond is largely made up of vision problems and chronic back trouble, so if I stumble, Panadol seems a better option than a blurred vision of the Pearly Gates. 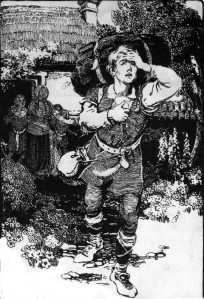 Staring down the final barrel, I can accept the allegory of the ‘journey’, but, unlike Christian, I don’t think it pays to take the trip too seriously. Since the 17th Century, salvation no longer requires a baptismal visa and temptation’s become a bit of a tourist trap, with no shortage of guides. The early part of my ‘journey’ was somewhat confusing. I was, they told me, ‘born of sin’. To compensate for that, they pummelled me with the ten commandments, but the amount of ‘shalt nots’ got a bit boring and the deadly sins more readily available; on top of that nobody I met got struck down trying the odd one or two out.

In my early teens, lust gave me a bit of a problem: the lumps inside Spot Simpson’s sister’s blouse were a constant torment. I’d like to say that like the good Christian I resisted, but, in truth, I was the only boy in the entire school who was refused access. The remaining sins I left to their own devices and dealt with them on an ‘as and when’ basis, believing then, as I still do, that it’s easier to focus on other people’s shortcomings than on your own. If Bunyan had done that, the saga would be much more interesting today; possibly a best seller, a movie even, as lots of folk like that depressing stuff these days.

Who would valiant be

Like I said, the true path’s a bit more complicated now, Mr Worldly-Wiseman is still around and most of us have spent a bit of time in the Town of Carnal Policy despite Bunyan’s warnings, but it’s doubt and guilt that gets us in the end. So, when you’ve done the three score and ten bit, Worldly-Wiseman will advise you that it’s time to re-calibrate your moral compass. With all the crap cluttering up your conscience, there’s heaps of stuff to feel sorry about; salvationists treat guilt like currency traders, swapping dreams of paradise for half-remembered guilt. Follow that road if you’re so inclined; personally, I won’t because like the song said ‘yesterday’s dead and gone’ and it’s a bit late to be thinking about spiritual insurance. I wrote this after I chanced on a reference to the work and I thought about a re-read, to explore the concept of right and wrong that existed then, and the belief that punishment could be administered via moral judgement or the threat of purgatory. 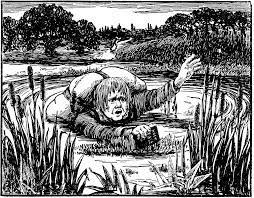 Christian in The Slough of Despond

We tend not to judge openly these days because it’s just not ‘enlightened’. The waffle-mob don’t like black and white, and I’m finding my passage more difficult since they took over. Their world is an impressionist one, where the heavenly kingdom is accessible if you think in pastel colours; thus the kid that nicked your granny’s purse is not a ‘little shit’ he’s ‘needy’. When all else fails you’re not ‘up to your arse in it’, simply being ‘challenged’ and punching your wife in the face is ‘spousal abuse’ rather than plain thuggery. At my age I need real-time guidance and blame targets.

Christian and his companion Hopeful arrive at The Celestial City

On my ‘journey’ I’ve outgrown six of the seven sins, but I’ve clung onto anger: I know it’s not fashionable, but there’s something healthy about getting pissed off at my age and there’s no shortage of causes. Tiddling around on a word processor where the odd typo goes unpunished is fine, but the frustrations wrought by a misplaced dot or forgotten password deserve every epithet I can chuck at the screen. The waffle-mob continue to promote the ‘big’ and presumably prettier picture and ‘mea culpa’ only exists on paper. I’ve re-explored the allegory and I’m now convinced that the good Christian wouldn’t last ten minutes in today’s traffic and Bunyan’s work is no bloody use as a road map.