Fans and stans by Angela Caldin

I came across a word that was new to me the other day. It was at the end of a Randy Rainbow tribute to Dr Fauci which was itself a parody of the song Gee, Officer Krupke from West Side Story. Randy sings ‘Dr Fauci, you’re the one we stan.’

I thought this was a strange verb and that maybe it was a mistake and had some letters missing. But then I saw the word again in The Guardian when the columnist Hadley Freeman wrote that she was ‘no Prince William stan’. The mystery deepened because this time it looked like a noun.

The world of Eminem

So what exactly does stan mean and where does it come from? It seems that it all stems from a song by Eminem. In 2000, the rapper released Stan as the third single off his award-winning album The Marshall Mathers LP. The song, about an obsessive fan named Stan who kills his pregnant girlfriend and then kills himself after Eminem refuses to answer his letters, topped the charts in Australia and the UK and did quite well in the US. As a result of this, Stan began to be used to describe people who go way above and beyond the average loyalty of most fans. At first, the word held the connotation of an abusive, letter-writing creep, but over the years is has lost its sinister overtones and now describes a fan who is more overzealous and obsessive than weird. 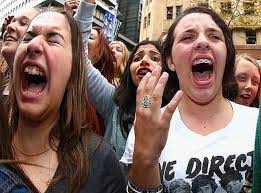 The question is, if stan originated in 2000, why have I heard it for the first time twenty years later? What secluded cave have I been lurking in? The main reason seems to be that stan has stayed tucked away inside specific fandoms, like K-Pop circles, for years and it’s only now beginning to see the light of day in mainstream media. But because of the cross-pollination between social media platforms, slang words like this blow up all the time.

So when Randy Rainbow says of Dr Fauci ‘you’re the one we stan’, he means that he admires and supports him with a passion, while when Hadley Freeman says that she is ‘no Prince William stan’, she means that she is most definitely and absolutely not a fan.