Posted on October 8, 2020 by talkaholics

Look on my works ye mighty and despair by Angela Caldin

A corpulent man with an orange face stood on the Truman balcony at the White House wheezing after a slow ascent of the steps. He pulled his shoulders back and puffed out his chest, telling the world not to let the virus dominate their lives. Little comfort for the families and friends of the two million who have died. He peeled off his mask in a gesture that might have been rehearsed several times in front of a mirror, before going inside to let droplets of infection fall freely on members of his household.

What a scene. The props were all there: the union flags, the ornate balustrade, the plush curtain swags and the glowing lights of the candelabra in the room behind. The desired image was one of a great leader who has overcome illness, but it was undermined by an obsessive fidgeting with jacket and tie. This is the leader of the free world, drunk with power and looking for all the world like a dictator.

It’s hard not to look at Trump without thinking of other leaders and how they met their end. Inevitably, Hitler comes to mind. He killed himself by gunshot and maybe cyanide capsule on 30 April 1945 in his Führerbunker in Berlin. Eva Braun, his wife of one day, died with him by taking cyanide. That afternoon, their remains were carried up the stairs through the bunker’s emergency exit, doused in petrol and set alight in the Reich Chancellery garden outside. Records in the Soviet archives show that their burned remains were recovered and interred in successive locations until 1946. They were exhumed again and cremated in 1970, and the ashes were scattered.

On the afternoon of 29 April, Hitler learned that his ally, Benito Mussolini, had been executed by Italian partisans. The bodies of Mussolini and his mistress, Clara Petacci, had been strung up by their heels. The corpses were later cut down and thrown into the gutter, where they were mocked by Italian dissenters. Hitler was determined to avoid such indignity in defeat.

The communist government of Nicolai Ceausescu in Romania very soon became severely totalitarian and was considered the most repressive in the Eastern Bloc at the time. His secret 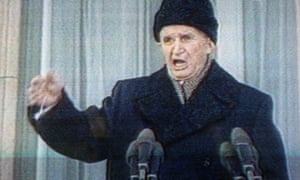 police, the Securitate, was responsible for mass surveillance as well as severe repression and human rights abuses within the country, and he suppressed and controlled the media and press, implementing methods that were among the harshest in the world.

As anti-government protesters demonstrated in Timișoara in December 1989, Ceausescu saw the demonstrations as a political threat and ordered military forces to open fire on 17 December, causing many deaths and injuries. The result was a massive spread of rioting and civil unrest across the country. The demonstrations, which reached Bucharest, led to the only violent overthrow of a communist government in the various revolutions of 1989. Ceaușescu and his wife Elena fled the capital in a helicopter, but they were captured by the military after the armed forces defected. After being tried and convicted of economic sabotage and genocide, they were immediately executed by firing squad on Christmas Day.

Maximilien Robespierre was a French revolutionary who gained power after the King was overthrown. He went into the revolution as an enlightened man, against slavery and the death penalty. But as he gained more power he changed completely. He allowed thousands of people to be killed in the terrors, forgetting his previous opposition to the death penalty.

Robespierre even established his own religion called the cult of the supreme being and the people were forced to organise festivals. It eventually became clear that he was either drunk with power or insane. The arrest of Robespierre and several close allies was ordered. They attempted suicide before being arrested but only one was successful. Robespierre apparently shot himself but the shot did not kill him, shattering his jaw, leaving him unable to speak. He was then executed by guillotine.

I met a traveller from an antique land,
Who said—“Two vast and trunkless legs of stone
Stand in the desert. . . . Near them, on the sand,
Half sunk a shattered visage lies, whose frown,
And wrinkled lip, and sneer of cold command,
Tell that its sculptor well those passions read
Which yet survive, stamped on these lifeless things,
The hand that mocked them, and the heart that fed;
And on the pedestal, these words appear:
My name is Ozymandias, King of Kings;
Look on my Works, ye Mighty, and despair!
Nothing beside remains. Round the decay
Of that colossal Wreck, boundless and bare
The lone and level sands stretch far away.”