I’ve been the victim of a complex marketing ploy and I may take some time to recover.

Back in early September, as I was paying for my shopping in Countdown, the cashier asked me if I was collecting Super Insect cards. Not wanting to miss out on anything, I said yes, and she handed me three packs. Thinking that they might be educational, I gave them to one of my granddaughters. She was fairly enthusiastic and persuaded her mother to buy the $6 album designed to house all the cards.

It turned out that for every $30 of purchases in store or online, customers received one pack for free. Each pack included two cards and a puzzle piece. There were 72 numbered cards and 36 puzzle pieces in all. The album included games, puzzles, facts about insects, lessons on endangered insects, and tips on how to study insects in their own environment. All this had been put together with the help of entomologist Ruud Kleinpaste aka Bugman and the detail was mind-boggling. The aim was to explain that although some insects can be scary, they play a vital role.

If we had only known, but thank goodness we didn’t, there was also a free App including insect

filters, a digital album, and augmented reality to bring the insect cards to life.

Swap till you drop 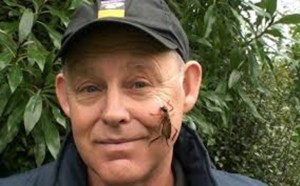 The promotion closed on 11 October and there were no more cards to be had from Countdown. Many people had almost filled their albums, but were short of a few numbers. So began a nationwide frenzied swapping exercise with parents posting on social media which numbers they were missing. Children swapped and donated while mothers left packs of cards in letterboxes up and down the country. There were even local mass swap-ins in schools and church halls.

My granddaughter needed four cards: 10, 12, 49 and 65. Those numbers are forever etched on my brain. I think it’s fair to say that she had perhaps lost interest rather, but I could not let it go. I posted on our local Freecycle group and a woman in Point Chev replied that I could have all her spares. I was off like a shot, but unfortunately overshot the turnoff and ended up wandering round Te Atatu for some considerable time. Her huge pack, when I eventually got to it, yielded only one of our numbers. A new desperate post gained a reply, again from Point Chev, from a grandmother who had all our remaining cards. Completion was within our grasp! I raced off, got hopelessly lost again until finally I opened the designated letter box and found the three cards nestling in the bottom.

The album was complete. It was a great feeling, rather like the one you get when you manage to pair up socks that have been solitary for some time. There’s a thought at the back of my mind that perhaps not many people availed themselves of the detailed insect information on the cards. The interest was in collecting the numbers and finishing the album. As far as Countdown is concerned, I’d like to know how much extra business the promotion brought in. My granddaughter is now encouraging us to shop at New World where there are 24 seedling kits to collect, each one with a plant character, keen to teach about growing, cooking and eating healthily.