And the trumpets sounded on the other side 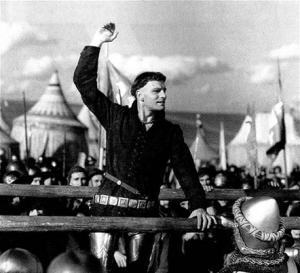 Henry V ‘Once more unto the breach, dear friends, once more.’

The art of shuffling off has lost a bit of glitz in recent times and I reckon we’re all poorer for it. Years ago, there was a bit of glory involved; there wasn’t much of a future in it even then, but it seemed more interesting. Domestically, it was mainly plunging daggers; overseas, knights rode into battle, yelling inspirational stuff like, ‘Once more unto the breach dear friends, once more!’ as an open invitation to get done in, which apparently lots accepted.

Leaders had a more hands-on approach: instead of sitting a couple of miles away jabbing buttons, they got stuck in! It was a male thing back then and if the main guy copped it, it was a big deal. They used to carry his body off on his shield and carve up a stone copy to make sure we never forgot him. As a result, local churches in Britain are full of reminders of these old blokes’ legacy to male chauvinism. The Scandinavians were pretty good at it too: Vikings used to shove their dead warriors off in a boat, and then set fire to it! I don’t want to downplay the professionalism of today’s funeral directors, but I reckon either of those beats the crap out of electric curtains and piped organ music.

A matter of honour

Duelling with pistols at dawn.

Those that returned to England intact from slaughtering foreigners with different beliefs forged the ‘upper class’ which infects the place to this very day. Between wars, there wasn’t much for these blokes to do in the way of foreign blood-letting, so they picked on each other. These superior beings couldn’t be seen to have a go in public so they invented the duel. The ‘Code Duello’ lent a bit of gravitas to whacking fellow citizens; some say it was a French idea, probably right, they’re good at silly waste, look at what they did to Joan of Arc. Anyway, back in Britain, there was an accepted process to the ritual, if a chap called you a plonker in public or was having it off with your missus, you slapped his chops with a glove and demanded satisfaction. This usually involved ‘pistols at dawn’. The two idiots marched ten paces from a back-to-back position, then turned and fired. This bit of gentlemanly theatre would have been laughable to ordinary folk if the silly sods hadn’t missed 90% of the time. Swords were an option, but messy and more painful, therefore not widely used in England.

Cheaper by the dozen 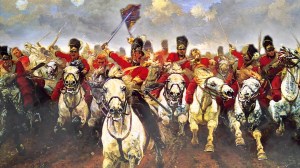 The charge of the Light Brigade – into the valley of death rode the six hundred.

The 19th century industrial revolution brought the end of the concept of romantic death. The odd poet tried a DIY version through sexual identity or frustration, but for the rest, convenience ruled. The arrival of the revolver and the repeating rifle meant you could plug the other guy several times, or do it from a safe distance. Chivalry and knightly sacrifice ended up in children’s books. England had an empire to run and that needed foot soldiers, not round table idealists. Note the line from ‘The Charge of the Light Brigade’, ‘theirs but to do and die’, ‘and’ replacing ‘or’ to avoid any hint of choice. In 1914 when England decided yet again to sound the call to arms, it was felt that violent death needed a bit of a brush-up to sell the concept to the masses and after a spot of brainstorming, ‘Your country needs you!’ sounded a lot more acceptable as a battle cry than ‘Or close the wall up with our English dead!’ Despite the propaganda, jingoism and poetical airbrushing of the ‘war to end all wars’, the idea of romantic death and lasting glory started to fade.

The next ‘war to end all wars’, produced roughly the same result but the cracks got bigger, some spoilsports even reckoned that romantic death was pointless and live cowardice was a better option.

After the second war to end all wars, the film industry resurrected the notion that dying through devotion or duty was a better way to go than wasting away or getting run over; better yet, they had an endless supply of re-usable heroes and heroines to satisfy the need for second-hand bloodshed. It was the golden age of romantic dying, and it was real! (Well, nearly). Screen idols faced certain death on a regular basis but never got wiped out, bloodstained daggers, hails of bullets and poignant deathbed scenes were the stuff of life, or at least imitation death.

I enjoyed the movies until some rotten sod decided that pointless slaughter was entertaining; I like a bit of harmless fantasy with my carnage, so I drew the line at the Chainsaw Massacre and I won’t be going back until Dracula bites Shirley Temple’s neck in a fit of uncontrolled lust. From here on I’m sticking to literature. Death may still shadow those of us of a romantic bent, but we dream beyond bedpans and flat lining monitors, we’ll ride off into the sunset, singing ‘Happy Trails to You’. After all, when the curtain comes down, a man’s gotta do what a man’s gotta do!