Canadian Indians wanting to preserve their way of life.

Sometimes I wonder if kids in every Commonwealth country were taught the same history in school – British history.  I grew up in Canada and yes, we did learn a bit about Canadian history, mainly focusing on how brave the British were, to fight against the Indian “savages”, and how wonderful it was that they won and now look at our fantastic country.  Mostly we had to learn about the kings and queens of England.  It wasn’t until I left school that I learned the real history of Canada and how the original people were slaughtered and hounded, their land stolen, the few survivors pushed into reservations.

Children who went to school in New Zealand, oddly, learned much the same story – British history, concentrating on how brave the British were, fighting against the “savages” and now look at our fantastic country. I’ve been reading a bit of New Zealand history myself lately, and I find that kids have been lied to big time.  I assume the same thing holds true for Canadian kids, American kids, and Australian kids.  I might start reading their stories too when I feel I’ve learned what really happened here in New Zealand. 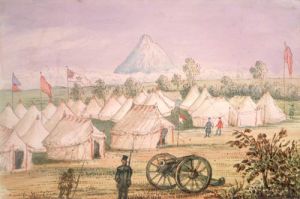 The British camp at Waitara, the base for forays into Maori controlled areas.

Maori in this country had a thriving economy, growing a plentiful supply of food, trading with settlers, and in fact, their produce kept the early settlers alive.  Maori also sold wheat, oats, maize and potatoes to the fledgling colony of New South Wales.  They were business people and farmers, traders and exporters.

An example of what happened to cause the downfall of Maori is the story of Waitara, Taranaki.   Iwi, realising what had happened when others had “sold” their land, decided not to sell any more land.  This did not please the British.  They attacked time and again, but Maori outsmarted them and beat them back.  Then a force of 18,000 soldiers descended upon the area, and that was the end for Maori.  The invaders took the land, and what we see today is an attractive township surrounded by farms and pastures.

This story was repeated all over New Zealand, Australia, Canada, the United States.  Not a pretty story, but one that needs to be told and I’m glad to report that at last New Zealand history is going to be taught in school.  Perhaps if children understand their own history, they will have some recognition that all the wealth and advantage white people have in New Zealand today is built upon theft and bloodshed.   This was not in the far distant past.  It all happened a few generations ago.

Maori leaders today talk about the loss of their whanau and their land, but what makes them saddest is their present status.  They have struggled to recover a trace of their former honour and dignity.  When you lose your land, and almost lose your language, and are constantly told you are inferior in every way, it’s very hard to bounce back.

Many people here think that Maori have received compensation through Treaty settlements.  In fact the total amount awarded over 73 settlements is $2.2 billion, which is about 2 months’ budget for superannuation, and compares with $1.6 billion given to people who lost investments when South Canterbury Finance went down the tubes.

I look forward to children being told stories that come closer to the truth of this country’s past.

← Season’s greetings from Trevor, Susan, Emily and Angela
The vote that counts by Angela Caldin →