Reasons to be thankful by Angela Caldin

There’s an advert on the BBC World Service broadcast here in Auckland which encourages listeners to think of ten things they are grateful for first thing in the morning and last thing at night. Whether you can have the same ten things at both times is not clear, but even so, I don’t usually get beyond five or six before the demands of the day or the lure of sleep take over.

Top of the list today for things I am thankful for would be the prospect of making shortbread with my third granddaughter. I am always nervous when approaching baking, dogged as I am by serial 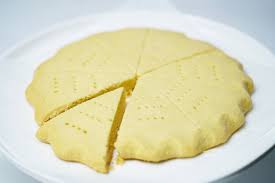 failures over the years. But she approaches the task with a vigour and an optimism which are infectious. We used the recipe from Edmond’s Cookbook which called for one part sugar, two parts butter and three parts flour. Interestingly, shortbread doesn’t contain any leavening such as baking powder or baking soda.

Our mixture was very crumbly and bits kept escaping from the main dough however much we kneaded it. But apparently, shortbread is so named because of its crumbly texture. An old meaning of the word short is crumbly as opposed to long or stretchy. The texture comes from its high fat content, provided by the fatty butter which inhibits the formation of long gluten strands. Sticking our mixture together as best we could, we made it into a log shape, chilling it for a while before cutting it into rather unorthodox oval shapes.

Shortbread is traditionally formed into one of three shapes: individual round biscuits or a thick 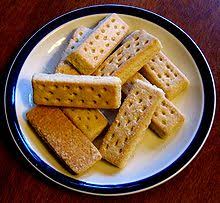 oblong slab cut into fingers or one large circle, which is divided into segments called petticoat tails as soon as it is taken out of the oven. This name may have come from the French petits cotés, a pointed biscuit eaten with wine.

There’s little doubt that shortbread originated in Scotland. It developed from medieval biscuit bread, which was an enriched bread roll dusted with sugar and spices and hardened into a dry, sweetened biscuit called a rusk. Eventually, yeast from the original rusk recipe was replaced by butter, which was becoming more of a staple in Britain and Ireland. Although shortbread was prepared during much of the Middle Ages, the refinement of shortbread is credited to Mary, Queen of Scots in the 16th century. Her variety was baked, cut into triangular wedges, and flavoured with caraway seeds. The first printed recipe, in 1736, came from a Scotswoman named Mrs McLintock.

Shortbread was expensive and reserved as a luxury for special occasions such as Christmas, Hogmanay (Scottish New Year’s Eve), and weddings. In Scotland, it was traditional to break a decorated shortbread cake over the head of a new bride on the entrance of her new house.

Our shortbread, delicious and short-lived

Amazingly, our crumbly, stiff dough retained its shape well as we cut it and pricked it with a fork. The recipe gave a cooking time of about 30 minutes and we watched anxiously through the oven glass to see how our biscuits were getting on. There was a minor panic when we tasted the first biscuit and it crumbled in our hands, but we bundled the rest back in for an extra ten minutes. They emerged intact and golden.

When I go to bed tonight and I’m thinking about the ten things I’m grateful for, high on the list will be the joy of producing, with my granddaughter, some very tasty shortbread biscuits, unconventionally shaped, but apart from that, a resounding success.