The government has a plan to plant one billion trees by 2028.  This is a stupendous endeavour, and it will cost a lot of money.  The trees they plant will be skinny little twigs with a few leaves on them.  The plan is part of the climate change deal whereby if we plant trees we get the right to spew even more emissions into our poor ruined atmosphere.

Native trees are slow growing so it will take many years until the newly planted ones are big enough to have even the smallest effect on our climate.  Meanwhile over the past 10 years Auckland has lost more than one third of its big old canopy trees.  This is an outcome of the National Government’s removal of protection of urban trees in 2012. It seems to me it’s time to stop massacring trees, time to keep whatever trees we have left, while we get going on the plan to plant a billion more.  Unfortunately, developers don’t agree. 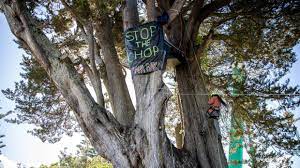 There is a wonderful grove of ancient trees in Avondale, an inner Auckland suburb, some of them over 100 years old and 20 metres tall.  Fifty of these have already been cut down, over the protests of the community.  There have been a lot of incredibly brave people trying their best to save them, including putting their own bodies on the line by sitting in the trees. Today police went in, arrested the protestors and dragged them away.  The remaining trees will be gone before I finish writing this.  Those people deserve medals, not jail sentences.

I fail to see the logic behind this destruction.  The climate is changing, there’s no doubt about that.  We won’t give up our cars, our aircons, our air travel or anything else that will have any impact on our lives.  One small thing we can do is stop cutting down trees.   If developers had to redesign their plans to fit around the trees, I can assure you they would if the law required it.

It’s high time we used our common sense and re-instated protection for mature trees before we wake up and find they’ve all gone, and all we have left are millions of spindly little seedlings struggling to survive.